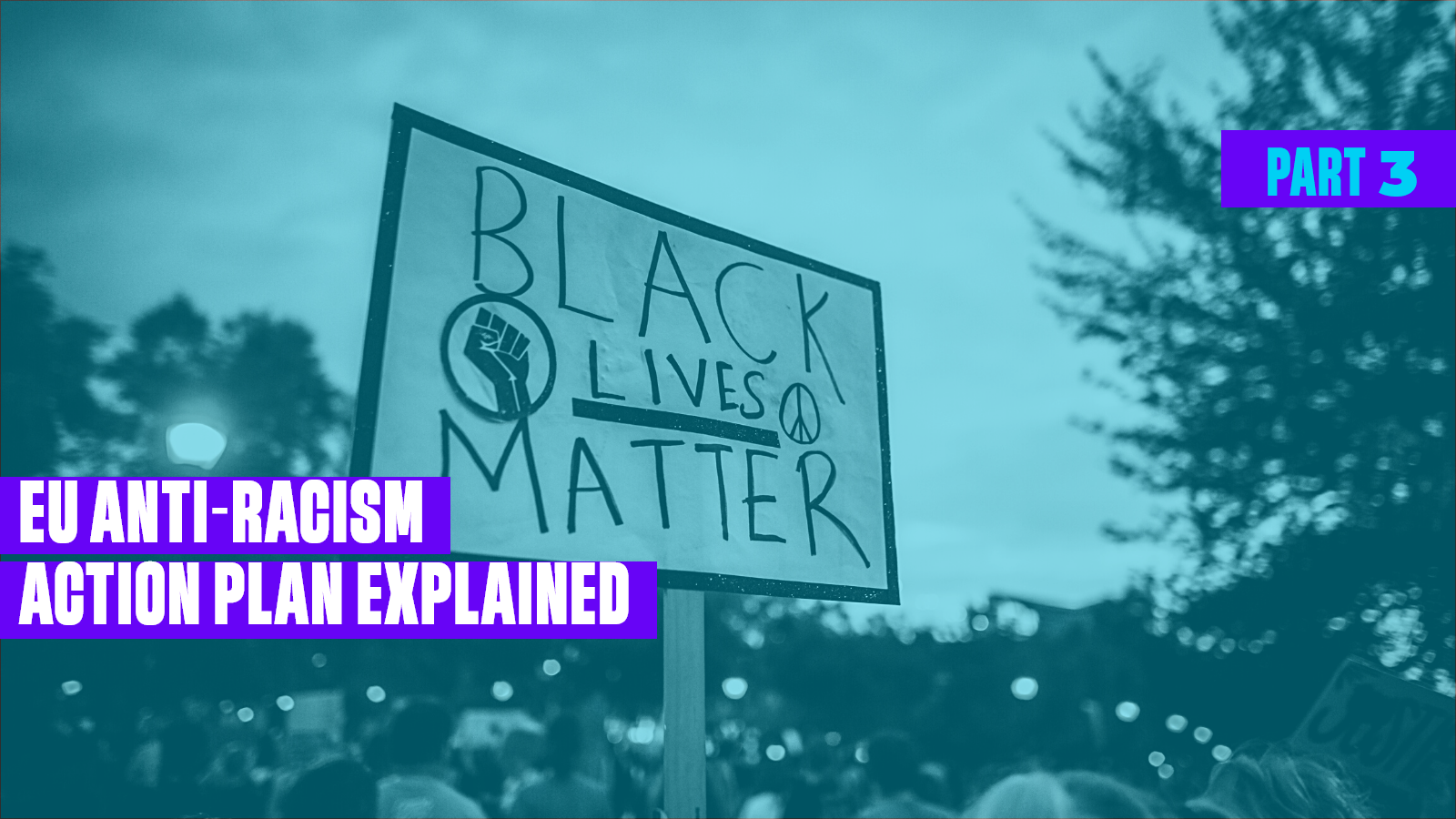 This blog post series by Julie Pascoet, Senior Advocacy Officer, aims at detailing and explaining some elements of this new EU policy instrument issued by the European Commission on 18th September 2020, in the aftermath of the Black Lives Matter movement and anti-racism protests across the world and in Europe. A resource to inform actions of anti-racist civil society willing to engage at national and EU level.

The second edition of the EU anti-racism Summit was held on the International Day for the elimination of racial discrimination on 21 March. This is a major milestone planned in the EU anti-racism action plan (EU ARAP). The European Parliament and the European Network against Racism had been calling for this Summit as a way to secure high-level commitment and inter-institutional cooperation at all levels. Indeed, since the release of the EU ARAP by the European Commission as a non-binding Communication (official document from the EU), keeping the momentum to secure strong political commitment is crucial to get implementation and monitoring on the ground.

This year, the EU Summit was  deemed to be important: there was high-level political representation from Portugal, Spain, Germany, Sweden and the European Commission, publicly championing anti-racism in the EU at the highest decision-making level.

However, few were missing. We’re hopeful that the presence of the Presidents of the European Commission and the European Parliament as well as the Presidency of the Council of the EU should be secured for future editions in order to strengthen EU’s leading role in the field. As always emphasised by ENAR, participation of civil society, especially racialised groups themselves, must be meaningful and decisive to represent the main concerns and solutions needed, especially in institutions that are still not properly including racialised groups. During several meetings of the Permanent Anti-Racism Civil society Forum led by EU anti-racism coordinator Michaela Moua civil society organisations were able to meaningfully contribute to the design of the Summit’s agenda, by proposing ideas on thematic panels and speakers.

Key elements were added thanks to civil society input and their crucial work and reports: prominence of the panel on National Action Plans against Racism; break-out sessions on racism in law enforcement, environmental racism, racism in education, restitution and decolonisation of public spaces, etc. Several civil society representatives, mostly from racialised groups, were also able to speak during the official EU Summit and raised key concerns. Our newly appointed Director Kim Smouter, but also our members of Diaspora Vote, the Belgian NAPAR coalition, Karen Taylor, ENAR chair from EOTO, CEJI, and ENAR report author, Archana Ramanujam, were invited to intervene. Despite the polls and possibility to post questions online, there was little room for interaction between decision makers and civil society.

Despite the efforts to mitigate them, there are important limitations with online formats for this kind of political event with fewer possibilities to debate and network meaningfully, especially in a context of shrinking democratic civic space. Building on that assessment, ENAR, ERGO and Equinox decided to co-organise an online People’s Summit for the second year in a row. This provided a space to build civil society ownership around the EU Summit and EU ARAP and encourage engagement in this process by gathering more than 60 participants. This year’s People’s Summit opened with a powerful statement from Momodou Jallow, Swedish Member of Parliament and General rapporteur against racism and intolerance of the Council of Europe, who urged for the need to take radical actions against structural racism.

All participants were then invited to share their thoughts and, priorities about the gaps in EU actions and their recommendations around the EU ARAP, climate justice, education, participation of racialised youth, law enforcement, etc. Main recommendations on those issues were  disseminated on  social media and a shortlist of them  were directly raised by civil society speakers during the EU Summit. This space proved to be a very positive element in the overall civil society assessment of the EU Summit and raised interest of racialised groups on what was happening at the EU level.

Important points on the future of equality in the EU have been raised during the EU Summit. They require follow-up to keep racial justice high on the agenda and hold EU and national institutions accountable. First, Member States need to adopt National Action Plans against Racism by end of 2022 while respecting the Guiding Principles adopted by the European Commission and Member States’ representatives. Secondly, a legislative proposal on Minimum Standards for Equality Bodies should give more power to these institutions supporting victims of discrimination and centring equality in our societies. Finally, important steps should be taken to address racism in law enforcement, including at legislative level.

However, major challenges persist and have been highlighted by speakers, decision makers and broader civil society. It includes addressing and acting politically on:

These issues need to be treated as priorities by the EU and national institutions to trigger rapid changes on the ground  and support more long-term policy and legislative processes.

In short, we need Hope and Progress.