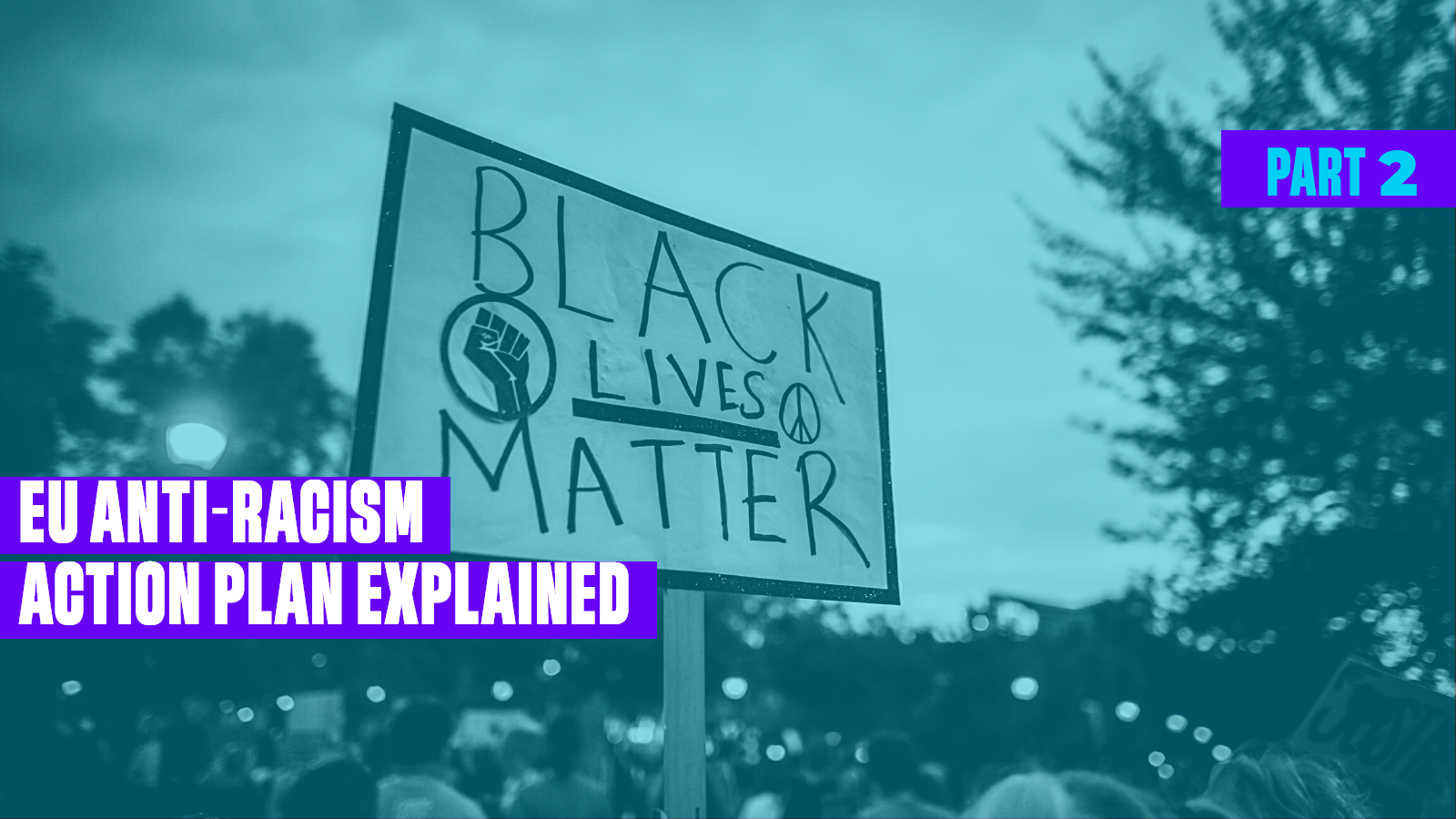 After an intense year for ENAR, our blog series on EU ARAP is back for good! This blog post series by Julie Pascoet, Senior Advocacy Officer, aims at detailing and explaining some elements of this new EU policy instrument issued by the European Commission on 18th September 2020, in the aftermath of the Black Lives Matter movement and anti-racism protests across the world and in Europe. A resource to inform actions of anti-racist activists willing to engage at national and EU level.

The EU has one of the strongest legal frameworks against racial discrimination, including related to religion. However, after 20 years of implementation, discrimination remains rampant.

The Fundamental Rights agency shows that one in four people from ethnic or immigrant minority groups (24%) has felt discriminated against in the previous 12 months, in one or more areas of daily life because of their background.

In defining and implementing its policies and activities, the Union shall aim to combat discrimination based on sex, racial or ethnic origin, religion or belief, disability age or sexual orientation

This means that no one should be excluded as a result of laws or practices based on these grounds, even more so when they are intersecting.

We need to stick to our European roots and transform this core principle into a living reality in which each European resident, irrespective of identity, can thrive equally.

Over the years, collected evidence has shown how existing legislation has failed to protect marginalised groups in society, especially when discrimination is embedded in laws and policies, and perpetuated by people in power. For example:

These situations show the limitations of the current equality legislation. We need change to effectively address the challenges of the most marginalised and to achieve a true Union of Equality.

To achieve that goal, ENAR would like to focus on four gaps and recommendations to unlock the potential of equality legislation, building on the assessment that the European Commission published back in March 2021:

First, there is a huge lack of structural and intersectional approach to discrimination.

Second, one of the main reasons for this lack of structural approach is that there is no obligation (or sometimes it’s outright forbidden) to collect equality data disaggregated by race. To uncover racial discrimination patterns and to identify the groups that are most disadvantaged in specific societal sectors and institutions, Member States should be obligated to collect these kinds of data while respecting fundamental rights safeguards. Both are possible and pretending the contrary is to root against a Union of Equality. This could be done via the new proposal for legislation on standards for equality bodies on which a public consultation is currently open.

Third, access to rights. How can law be efficient and relevant if it is not known and used, or if it becomes too difficult to access justice, especially for people with no resources? Costly legal aid, under-resourced NGOs, politically dependent and under-resourced equality bodies, xenophobic political debates, racism in law enforcement, are but some of the issues to address. And this should be primarily tackled at the highest level of power. Policy makers and institutions need to lead by example and be vocal against abuses, this is the only way to preserve the Rule of Law in Europe and keep equity and justice on the agenda. They also need to protect Human rights defenders supporting victims inside the EU, that are increasingly being attacked by some EU governments.

Finally, institutions that are exercising public authority are not currently covered under the scope of the non-discrimination directive and this is posing a significant issue of accountability of power structures. That’s why we ask the European Commission to present its proposal to include law enforcement in the legislative framework as mentioned in the EU anti-racism action plan.

The EU anti-racism action plan and other equality strategies have provided unique opportunities to mainstream equality in all policies, also thanks to the EU Commissioner for Equality, Helena Dalli, who contributed greatly to moving forward on a Union of Equality. We support the European Institutions to go further and implement key measures that can address remaining challenges for the most marginalised, such as the ones above that remain unaddressed. We therefore encourage civil society to include their concerns in this second open consultation aiming at highlighting the gaps in the current Race Equality Directive.

Member States also have a key role to play. France is currently playing a major role in Europe by holding the Presidency of the EU. However, positions from the French government against intersectionality and structural racism, going as far as trying to limit academic freedom, raises serious concerns on how far it will support the implementation of the EU Anti-Racism Action Plan and improved Equality Legislation. The Council Conclusions of the Presidency on racism and antisemitism should be the opportunity to strengthen the EU Member States’ commitments to the EU ARAP, which adoption has been a landmark moment in the understanding of structural racism in Europe.

Let’s ensure we move forward and not backward. Let’s make our voice heard.