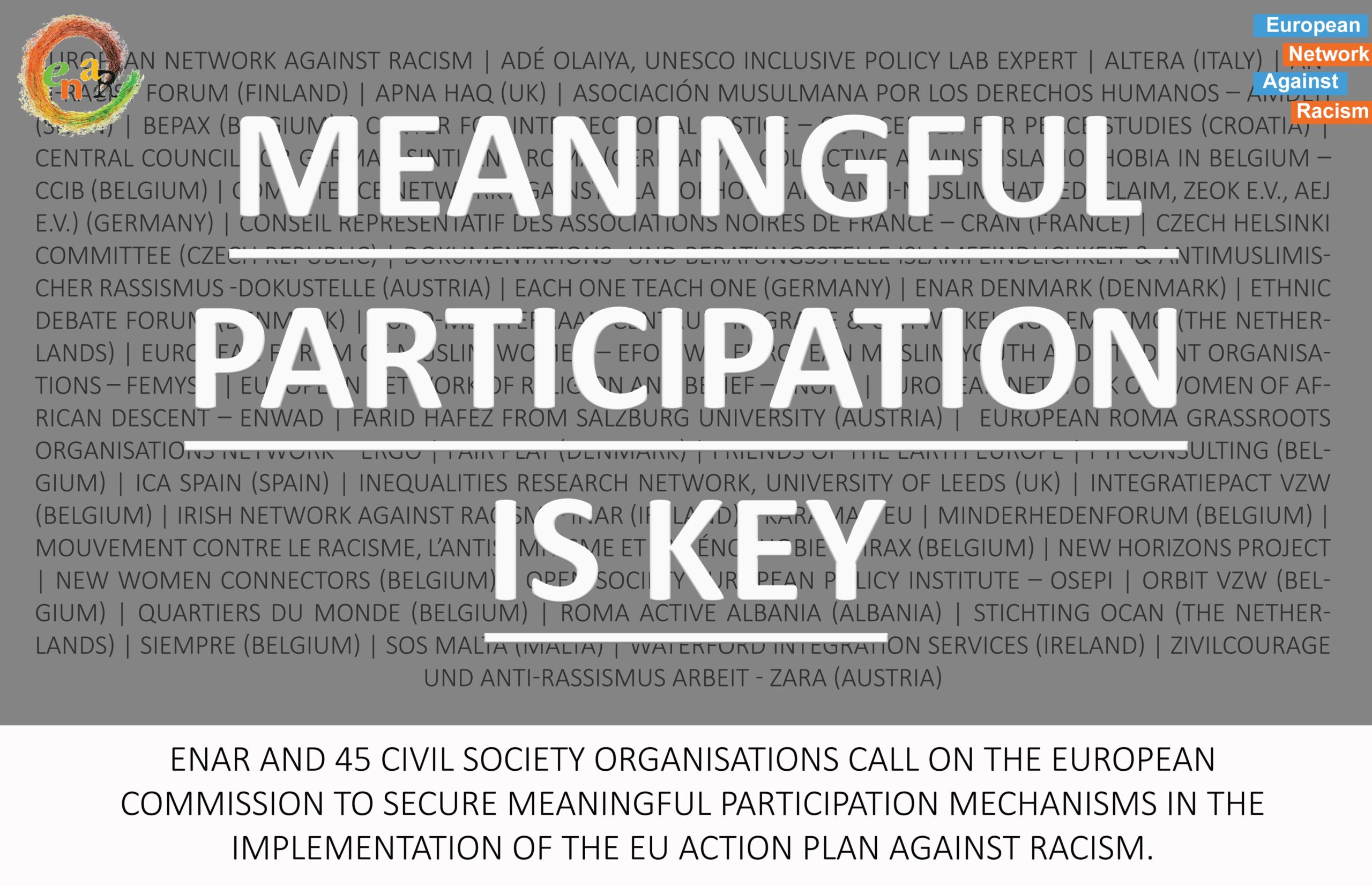 ENAR and 45 civil society organisations call on the European Commission to secure meaningful and participation mechanisms in the implementation of the EU Action Plan Against Racism.

Securing meaningful participation: a key element of success for the EU anti-racism action plan Open letter to EU Commission President von der Leyen, Vice-President Jourova and Commissioner Dalli As organisations working to achieve racial equality and justice, we welcome the EU Action Plan Against Racism published by the European Commission on 18 September 2020. For the first time, the EU explicitly acknowledges the existence of structural, institutional and historical dimensions of racism in Europe and the need to address them through wide-ranging policies. There are a number of positive proposals in the action plan, in line with what ENAR has been calling for, but also gaps that need to be addressed. Many plans against racism in the past have remained on paper. In order to avoid this and fulfil the potential of this action plan to improve the lives of people affected by racism, there must be strong processes in place to ensure that it is implemented, with clear and measurable targets, and that progress is monitored. The processes related to this plan are as important as its content as they will allow for its legitimacy, ownership and most importantly, its efficiency in countering structural racism. There should be a strong focus on ensuring that racialised groups with key expertise from civil society organisations are consulted and engaged in a meaningful and timely manner on the implementation of the plan. We welcome the fact that the plan foresees some mechanisms to secure resources particularly by strengthening participation of civil society organisations working with racialised groups, including: 1. The appointment of an EU anti-racism coordinator. 2. At least two meetings per year with civil society organisations active in the fight against racism at European, national and local levels. 3. Existing high-level groups on racism and non-discrimination playing an important role in implementation and cooperation. 4. The new internal Task Force on Equality ensuring racial equality mainstreaming and consultation. 5. Funding for civil society available under the Citizens, Equality, Rights and Values Programme and Horizon Europe. We call on the European Commission to ensure that the action plan is a meaningful EU tool to address structural racism with adequate resources and expertise, by strengthening the following processes: 1. A structured and permanent participatory mechanism for civil society There should be strong mechanisms in place to regularly involve EU and NGOs including racialised groups in policy discussions, design and implementation, to ensure policies meaningfully address issues of racialised groups according to their lived experiences and unique expertise. This is even more crucial considering the lack of racial diversity in institutions currently in Europe. We need a clear structure allowing civil society to be in a regular dialogue with the European Commission. The European Commission should therefore set up a permanent European Commission advisory committee on anti-racism involving NGOs, Member States and social partners to support the implementation of policies, in particular the framework of National Action Plans against Racism. In addition, the mandate of the two high-level groups on combating racism and on non-discrimination should be strengthened, by widening their scope to include structural and institutional racial discrimination. They should also be both opened to participation of civil society and supported by a regular steering group of European umbrella NGOs working on anti-racism and non-discrimination. 2. An operational and anti-racism expert profile for the EU coordinator against racism The coordinator should play a key role in overseeing the implementation of the plan, and coordinating actions across different policy areas in the European Commission, closely liaising with civil society organisations. To that end, this person should be appointed based on relevant skills and competences, have strong expertise on anti-racism issues and intersectionality, and be from a racialised group. This person should have a good knowledge of anti-racism movements in Europe to secure engagement and participation of a wide diversity of civil society experts. We also request that the recruitment process is fair, clear and transparent. Moreover, the coordinator should be strongly supported by a dedicated team, in close collaboration with existing services of the European Commission. 3. Clear coordination of anti-racism work within the European Commission We welcome the comprehensive anti-racism framework laid out in the Action Plan. However, it is important to clarify how the coordinator and different services will work together to coordinate and monitor its progress. To improve efficiency of the work and coordination among the different strands of work highlighted in the Action Plan, we call for: • The Commission Directorate General for Justice’s services to be organised by re-grouping all teams working on different forms of racism and racial discrimination in one unit, with more resources allocated and a strengthened mandate of the Commissioner for Equality to oversee this work, under the direct supervision of President Ursula von der Leyen. • The task force for equality to closely work with this unit, to include a specific working group on racial equality mainstreaming, to ensure transparency about its work and to involve civil society. 4. Dedicated funding The EU anti-racism action plan should be implemented with dedicated and adequate human and financial resources, including via specific budget lines for the European Commission’s services. Funding should be secured for the implementation of EU and national action plans against racism, in addition to specific priorities under the Citizens, Equality, Rights and Values Programme and the European Structural Funds. We would welcome the opportunity to meet with you to present these demands in more details and discuss together how to move forward. Yours sincerely, Karen Taylor, Chair of the European Network Against Racism