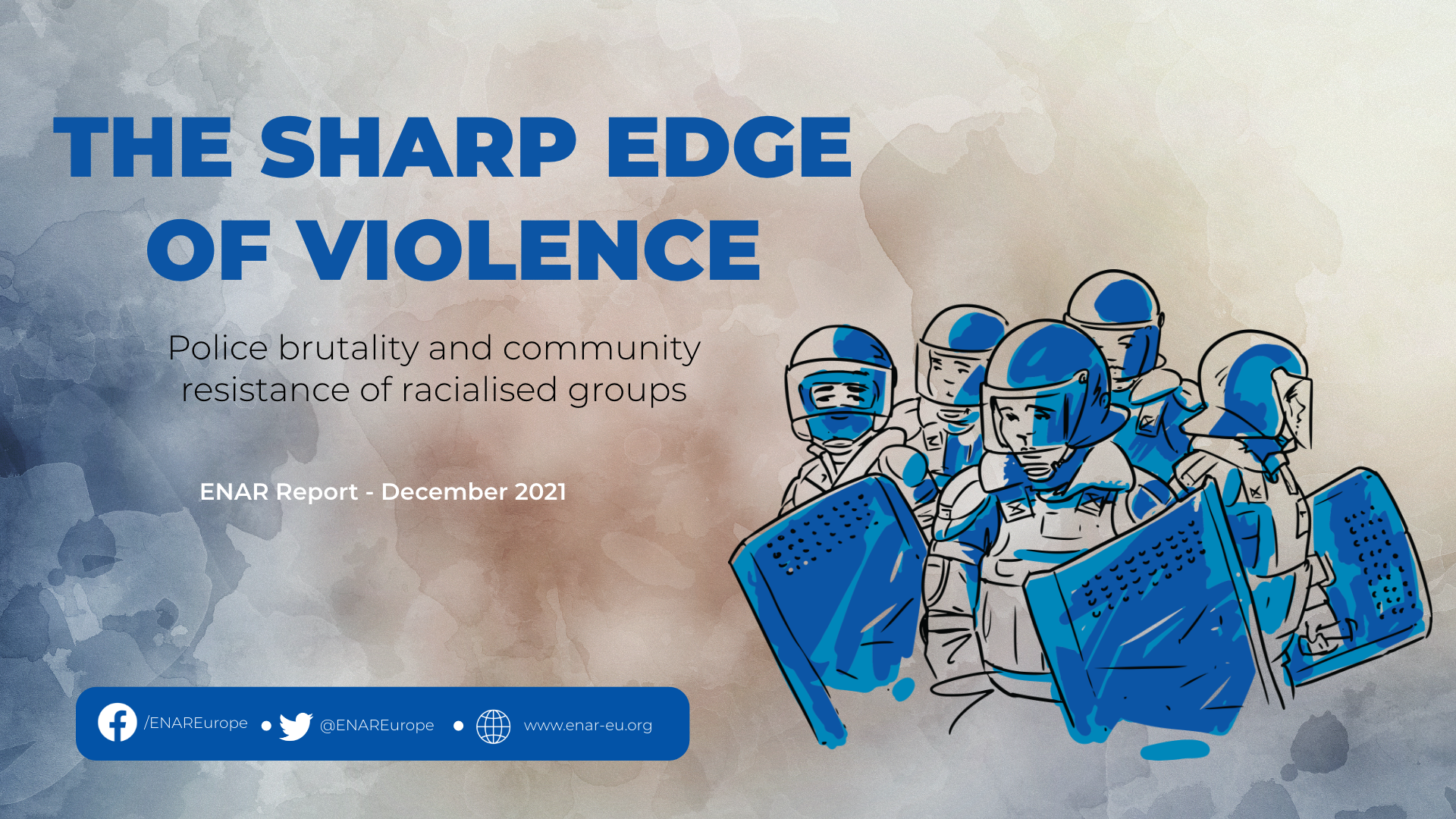 Brussels 09/12/2021 – On Human Rights Day, ENAR launches its new report “The sharp edge of violence: police brutality and community resistance for racialised groups” and addresses racist police violence as a product of institutional racism and a symptom of racial injustice.

Stanislav Tomáš, Joseph Chovanec, Semira Adamu, Adama Traoré, Ousman Sey, Amad Ahmad, and Tomy Holten are but a few of the many victims who have died at the hands of racist police violence in Europe. Though the places and circumstances around their deaths are different, the result is always the same: the police officers are rarely, if ever, convicted.

According to ENAR’s new report ‘The sharp edge of violence: Police brutality and community resistance of racialised groups’, racist police brutality and violence is more than just an instance of violence against an individual, and more than just hateful acts between individuals. It is a product of structural racism and a symptom of racial injustice. Drawing on data collection of police brutality incidents in five Member States (Croatia, France, Belgium, Sweden and Bulgaria) between 2015 and 2020, the findings highlight how policing operates with a common set of norms that are part of a broader structure that actively dehumanises racialised groups. The results foster a culture of impunity where acts of racism are often not held to account, leaving racialised groups over-policed and under-protected.

This publication also raises the ramifications of COVID-19 on enforcement measures, displaying the disproportional impacts of policing during the pandemic on racial and ethnic minorities, especially in poor urban areas, public spaces, informal settlements or refugee camps. Marginalised groups stand to be the primary victims of this expansion in state power and the use of the police for public health issues.

Karen Taylor, Chair of the ENAR Board, said: “Even though brutality, excessive use of force and suppression of people’s rights goes against our legal framework, the fact there are nearly zero convictions against the police in cases of racist violence across Europe clearly shows that their actions are sanctioned by Member States; institutional racism allows this violence to happen. With equality data collection, it would be clear that these are not isolated incidents but symptoms of a widespread issue.”

Moreover, the report also analyses how community resistance and protests increased the engagement not only from victims affected by this issue but also from other civil society organisations working in other fields and sectors. The uprising of the movement was an opportunity to underline the need for legal redress and accountability for acts of brutality and violence.

ENAR Senior Research Officer and main author of the report, Ojeaku Nwabuzo, said: “It is important to reflect on the idea that policing does not have to mean the violent, hierarchical, coercive institutions that we see today. If we were to reimagine policing, we could see it as a bottom-up system that ensures the wellbeing of our communities not just the suppression of crime that benefits a small elite group.”

Twenty years ago, the European Union adopted landmark laws to prohibit discrimination based on race or ethnic origin. On Human Rights Day, ENAR and its 180 members unveil the rising trend of racist violence, the persistent discrimination and racial inequality at Member States level, and demands a stronger public commitment from the European Commission to address police violence and structural racism in Europe.

Karen Taylor concluded: “We ask policy-makers as well as local communities to redefine what safety and security means.  The police are an institution founded on principles of inequality and indignity; it is rotten at the root. To redefine safety and security, to invest in services for the community and divest from carceral systems and institutions will transform social life.”