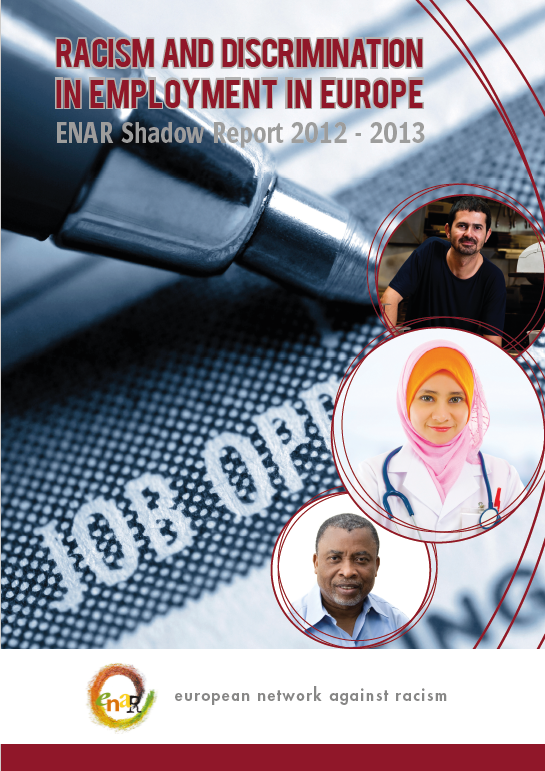 Brussels, 17 March 2014 – For Black people, Roma, Muslims, migrants from non-EU countries, and women with a minority or migrant background living in Europe, discrimination is a major obstacle when looking for a job. Even once in employment, things don’t get better. This is the conclusion of ENAR’s 2012/13 Shadow Report on racism and discrimination in employment in Europe, released ahead of International Day Against Racial Discrimination.

The economic crisis has worsened discrimination against minorities and migrants and increased the employment gap between ethnic minorities and the majority population. In Finland and Belgium, unemployment rates are three times higher for people born outside the EU than for the native-born population. African migrants in Spain are twice as likely to be unemployed compared to people from the majority population. Discrimination at the stage of recruitment manifests itself for instance when the selection is on the basis of names and addresses or in discriminatory practices of recruitment agencies. In the United Kingdom, people with foreign sounding names are a third less likely to be shortlisted for jobs than people with white British sounding names. In the Netherlands, more than half of recruitment agencies complied with a request not to introduce Moroccan, Turkish or Surinamese candidates. Even once they are in a job, ethnic and religious minorities continue to face unequal treatment. Lower wages, glass ceiling, precarious and difficult working conditions, harassment and abusive dismissal are just some of the manifestations. In Hungary for instance, wages paid to Roma are lower than the Hungarian minimum wage. In Poland, migrant workers are often forced to work overtime under the threat of dismissal. These discriminatory practices occur despite the existence of EU legislation prohibiting discrimination in employment. The report highlights that these laws are not always as efficient as they should be. There are also numerous obstacles to bringing cases to court, including the difficulty to prove discrimination, a lack of trust in the judicial system, lack of awareness of legal protections, and the length and cost of proceedings. Although efforts are being made by institutions and organisations – including trade unions and employers – to tackle this reality, they are few and far between. ENAR Chair Sarah Isal said: “It is worrying to see the lack of political will to tackle discrimination in employment when we see how pervasive and widespread it is across Europe. It’s time politicians take this issue seriously, especially as access to quality work will be a high priority among voters – including members of minorities – for the upcoming European elections. They should realise that discriminating and excluding individuals from jobs results in a huge waste of talents and skills, of human and financial resources, and ultimately affects progress and the well-being of all people living in Europe.” For further information, contact: Georgina Siklossy, Communication and Press Officer Tel: +32 (0)2 229 35 70 – Mobile: +32 (0)473 490 531 – Email: georgina@enar-eu.org – Web: www.enar-eu.org Notes to the editor: 1. The European Network Against Racism (ENAR aisbl) stands up against racism and discrimination and advocates for equality and solidarity for all in Europe. We connect local and national anti-racist NGOs throughout Europe and voice the concerns of ethnic and religious minorities in European and national policy debates. 2. ENAR’s Shadow Report on racism and discrimination in employment in Europe draws on 23 national Shadow Reports (Austria, Belgium, Bulgaria, Croatia, Czech Republic, Finland, France, Germany, Greece, Hungary, Ireland, Italy, Lithuania, Luxembourg, Malta, the Netherlands, Poland, Portugal, Slovakia, Slovenia, Spain, Turkey, United Kingdom). The European and national reports are available here: http://www.enar-eu.org/Shadow-Reports-on-racism-in-Europe-203 3. See also our fact sheet of key findings on racism and discrimination in employment in Europe. 4. On 21 March 1960, 69 Black demonstrators were killed at a peaceful protest against apartheid laws in South Africa. As a result, 21 March was declared “International Day for the Elimination of Racial Discrimination” by the UN in 1966. – French version of the press release: Pas d’égalité des chances dans l’emploi pour les minorités ethniques et religieuses en Europe