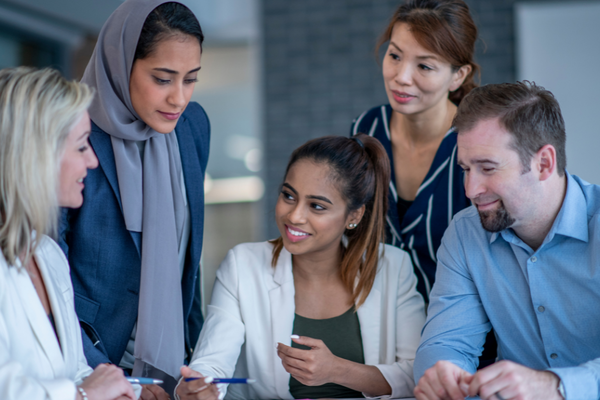 As part of ENAR’s work on dismantling structural racism in the labour market, this article provides a summarized approach for corporates to address challenges experienced by racialised minorities.

The uprisings of the Anti-racist civil society in 2020 resulted in the genesis of global awareness that racism is a structural issue, affecting all areas of life and actors of society. Racial issues arrived at the forefront of policymaking with the EU Anti Racism Action Plan, with a consistent call for systemic changes and with this development came the interest of companies to work further on this topic.

Private-owned companies account for 79% of jobs existing in OCDE [1] countries and therefore have a leading role to play in dismantling structural barriers preventing racialised people from equally accessing the labour market and ensuring their well-being, from recruitment to retirement. Additionally, as the first creator of economic growth in our capitalistic systems, they are powerful advocates for change as they hold immense power to tap into society and shape it.

While the interest for inclusive diversity policies from employers is growing, with the increasing awareness that diversity is a factor of business success, companies must also reflect on whether their policies are supporting racialised people and communities. It can seem like companies are damned if they do something likely to be perceived as a PR or marketing stunt, but also damned if they do not take any actions towards achieving racial justice and equity, especially since young people are significantly shifting the way they consume to focus on brands whose values align with their own. To make a difference, companies must review the intention behind their actions and whether they’re taking actions to advance racial equality or working in a hot topic and trend mindset to appeal to civil society and their customers.

Individual forms of racism dominate the workplace conversation, where racism is seen as an individual phenomenon rooted in one’s behaviour. Mainstreaming this conceptualization of racism leads to a concentration of the policies, measures and public debate on this specific form of racism, which hinders showcasing structural, systemic and institutional phenomena. This has an impact on the tools available to tackle racism, such as unconscious bias and awareness training which often does not proceed to transform interpersonal relationships the way it was expected.

Being a corporate ally requires focusing on intersectional forms of racism that are occurring and perpetuated by the company. Considering that George Floyd’s murder had an immense emotional impact on racialised employees around the world, to achieve the level of change workplaces are committing, it is crucial to acknowledge structural and institutional racism and the role the company and its leaders play. For example, in Belgium, job applicants with foreign-sounding names have 30% fewer chances of being invited to a job interview compared to applicants with a similar profile but Flemish sounding names [2].

2. Understanding the situation and its manifestations

Structural racism refers to unfair policies and discriminatory practices carried out by institutions such as schools, private companies, healthcare systems that produce racially unequal outcomes for racialised groups. Individuals within these institutions exert power that is used to reinforce racial inequalities. Structural racism describes the statistical representation of discrimination through the aggregation of individual cases of discrimination. It represents the social manifestation of structural inequalities [3]. To combat racism, companies must understand that they exert power and that they have a duty to challenge their roles in perpetuating the oppression and inequalities racialised groups are facing.

Applying the intersectional framework to manifestations of racism in the workplace broadcasts the tentacular nature of racism and its different demonstrations. Interpersonal racism can consist of micro-aggression, harassment, bullying based on the racialised perception of an individual. At the institutional level, racism is showcased through discrimination in access to employment, at all levels of the organisation but most specifically when there is a lack of or an absence of representation in leading managerial positions. Finally, structural racism is displayed in legislation and policies participating in the exclusion of some racialised groups from the labour market, such as laws and practices prohibiting headscarves in the workplace, or migration laws.

It is important here to understand that racialisation is a process whereby people’s identities are attributed racial meaning, particularly as they refer to social structures and institutional systems . Therefore, racialised people are not only identifiable through skin colour and ethnicity but also encompass culture and religion. In Europe, it represents Black persons, people of African descent, Arab, Asian, Caribbean, Latin American, Migrants, Roma or Sinti descent, Muslims or Jews (or people perceived as such).

Fully grasping the tentacular nature of racism and how embedded it is in the labour market requires data. Companies should start collecting equality data disaggregated by race, ethnicity and other grounds of diversity. Equality data is crucial to understand whether companies’ workforce is representative of society as a whole and to enforce informed change. While we have seen the advancement that it generated on gender equality and LGBTIQ+ rights by informing policy-making, companies still face difficulties to fully embark on this endeavour when it comes to racialisation. Early anonymised data collected through staff surveys based on self-identification would make it legally possible to take stock of the racial and religious diversity within the workforce. The key principles for secured and inclusive equality data collection in employment are: self-identification, voluntary response, anonymity or early-stage anonymisation, informed consent, community consultation and the right to choose multiple and intersectional identities [4].

Additionally, companies could undergo racial equity audits to assess their advancement in racial equality. Racial equity audits are independent, objective and holistic analyses of companies’ policies, practices, products, services and efforts to combat racism and to end discriminations within or exhibited by companies to their customers, suppliers or other stakeholders [5].

While data stemming from equality data collection and racial equity audits is essential, collecting, gathering and analysing data is merely the beginning of the organisation’s journey to effectively combat structural and institutional forms of racism. Data is only a tool allowing companies to make informed decisions and to introduce meaningful remedial measures to improve the situation of racialised minorities in the labour market.

3. Implementing solutions with a streamlined approach encompassing all levels of the organisation

ENAR has been working for the past 13 years on advocating for meaningful participation in the labour market and dismantling structural barriers through its Equal@Work platform. While many topical reports are available to focus on specific grounds of diversity or discrimination (e.g., religious minorities, refugees, women of colour, mental health, artificial intelligence in recruitment and equality data collection), our upcoming reports and factsheet of structural racism and intersectionality to be published in 2022 will provide a completer and more comprehensive overview of the remedy measures available to shift company cultures and business models towards intersectional models.