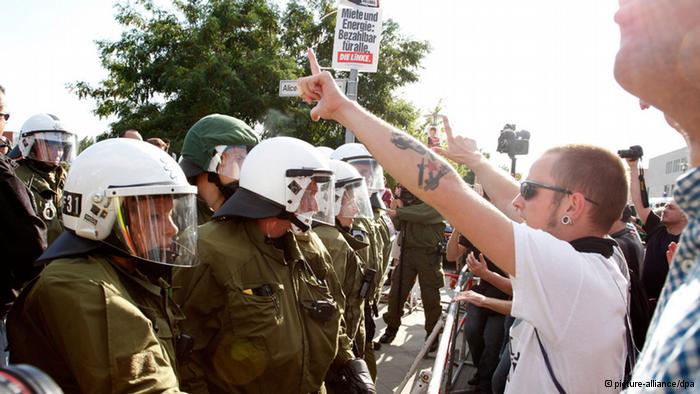 There were twice as many right-wing attacks on refugee shelters in Germany in 2013 as the year before. The German government and refugee groups in the country are alarmed by the development.

In the Bavarian city of Fichtelberg on a Saturday afternoon in January 2014, a group of men pushed their way into a refugee shelter. Dressed in black and partially masked, the intruders stopped at the stairwell and began yelling, according to sources quoted in the local newspaper “Nordbayerische Kurier.”

Nobody in the shelter, however, understood what the men were shouting as most of the refugees had just arrived in Bavaria and spoke no German. After the shouting, the black-clad group quickly left the refugee shelter.

Arson attacks, broken windows and racists slurs painted on buildings are among the rising number of right-wing acts of aggression against refugee shelters across Germany. The Federal Criminal Police (BKA) registered 59 right-wing offenses in 2013, more then twice as many as the year before.

The real figure, however, could be higher as BKA records only offenses where the nature of a crime can clearly be attributed to right-wing extremists. Attacks like the one in Fichtelberg, for instance, don’t appear in the statistics. Police need evidence to determine a xenophobic crime took place, and shouting in the hallway that the shelter’s residents did not understand does not qualify.

The human rights organization Pro Asylum has registered 20 offenses, including 12 arson attacks, so far this year. Managing director Günter Burkardt told DW that the development reminded him of the charged atmosphere in the early 1990s when right-wing extremists attacked refugees and immigrants, some of whom later died. Fortunately, Burkardt added, authorities have yet to detect any campaigns similar to those in the 1990s.

Groups like the National Democratic Party (NPD), Pro Deutschland and Alternative for Germany (AfD) are the ones stirring public opinion against foreigners today, according to Burkardt.

Right-wing researcher Hajo Funke also said Germany has avoided the “wave of pogroms” that poured over the country shortly after unification, resulting in deaths; 27 people died from right-wing attacks in 1992 alone.

But Funke is worried about current developments. “The big danger is a spike in arson attacks, and we have more casualties and deaths,” he told DW.

The German government also said it is concerned by the BKA statistics. “The right-wing scene turned noticeably against asylum seekers in 2013,” Pamela Müller-Niese, a spokeswoman for the Federal Ministry of the Interior, said in a statement.

The number of asylum seekers in 2013 reached its highest level since 1999. A total of some 127,000 people from Syria, Afghanistan and other hot spots in the world fled to Germany last year. To accommodate them, numerous cities have converted empty schools and military barracks into temporary housing.

In many places, however, residents feel ignored, and right-wing extremists have taken advantage of the situation by joining anti-asylum protests in their neighborhood. Such was the case in Berlin-Hellersdorf. The situation there became so tense last year that refugees required police protection to enter their housing units.

“The far-right is trying to exploit the mood in many parts of the population,” said Günter Burkhardt. “There’s an attempt to connect to the middle of society.”

Interior Ministry spokeswoman Müller-Niese also said there were concerns about the right-wing appealing to more of society by hyping allegations of “asylum abuse.”

Half of Germans say the country already has too many asylum seekers, according to Funke.

Pro Asyl’s Burkhardt called on politicians to take responsibility for curbing the right-wing’s populist propaganda in Germany. He said there needs to be a clear commitment to the basic right of asylum and corresponding measures that allow asylum seekers to integrate in Germany.

“We need to find accommodations for asylum seekers in apartments and not in shelters, which are a visible target for right-wing attackers,” Burkhardt added.

What’s also needed, he said, is an integration concept for refugees. They need access to the employment market and freedom of movement so that they can be perceived what they are – perfectly normal people.