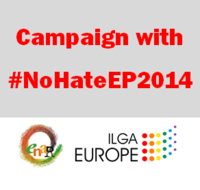 ILGA-Europe (the European region of the International Lesbian, Gay, Bisexual, Trans and Intersex Association) and ENAR (the European Network Against Racism) will be launching their Appeal for a European election campaign free from discrimination and intolerance with a press conference in the European Parliament. There will also be a mobilisation event on the same day.

On Wednesday 19 March, ILGA-Europe (the European region of the International Lesbian, Gay, Bisexual, Trans and Intersex Association) and ENAR (the European Network Against Racism) are launching the Appeal for an European election campaign free from discrimination and intolerance with a press conference in the European Parliament.

The 2014 European Parliament elections are taking place in a context marked by the crisis and the rise of extremist parties in different parts of the European Union. Exclusion and intolerance represent a real threat for the human rights of many European citizens, in particular members of ethnic, religious and/or sexual minorities.

Ethnic and religious minorities, lesbian, gay, bisexual, trans and intersex people are often targeted and instrumentalised by hostile statements. ENAR and ILGA-Europe, two leading anti-racist and LGBTI European NGOs, have decided to react together. Common actions will promote and reinforce solidarity between our respective communities. We’ll monitor the electoral campaign and react to any attempts to instigate mutual fear and hostility between them.

On 19 March, the main European political parties are joining ILGA-Europe and ENAR to launch an Appeal for an election campaign free from discrimination and intolerance. Together, we reassert the EU’s democratic and inclusive values. We combat incitement to discrimination, prejudice, stigmatisation and confusion.

We are also organising a mobilisation event to present our campaign tools for an EU election free from hate on the same day, in the afternoon. We will introduce our online reporting form which will help civil society to monitor the use of hate speech by candidates during the election campaign. There will be also room to discuss strategies on how to join forces ahead of the European election. 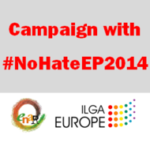