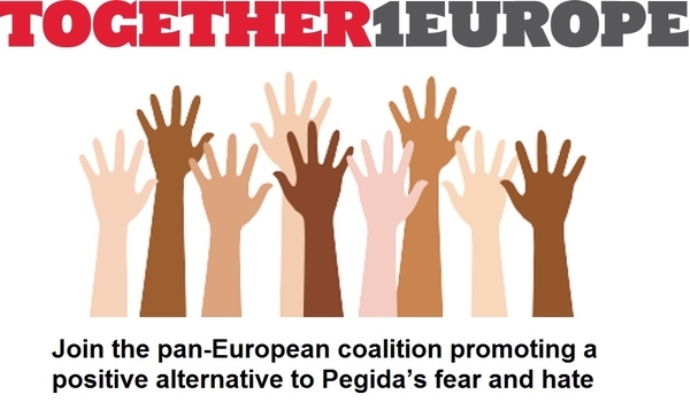 We Stand #Together across Europe

In less than two weeks, on 6 February, Pegida and other far right and populist, anti-migrant and anti-Muslim groups plan to march in at least 12 European countries.

We could allow 6 February to be portrayed in national and European, traditional and social media as the day when few, but strong voices of fear and hate were heard the loudest. Or we could actually make it the day when a positive, diverse, pan-European movement of voices came #TOGETHER to show that We Are The Many and We Choose HOPE.

HOPE not hate, ENAR, and other like-minded organisations and individuals are joining forces so that, on 6 February, our pan-European voices of HOPE sound louder than the shouts of hate and scaremongering coming from far right and populist, anti-migrant and anti-Muslim groups.

But we need you too. So join us @Together1Europe – a network of pan-European anti-racist, anti-fascist, social justice and human & migrant rights organisations – in a Thunderclap that will go live at 12 noon GMT, on Saturday, 6 February.

Add your voice now at www.thunderclap.it/projects/37008-together-one-europe

For our positive, inclusive message to trend on social media across Europe we encourage everyone:

6 February is not just about standing in solidarity with the Muslim communities of Europe. It is about the street, village, city, country and continent we want to live in and about celebrating all the values and ideals that bring us TOGETHER in a modern, tolerant Europe.

@Together1Europe: a positive, pan-European coalition of hearts and minds coming TOGETHER against Pegida’s fear and hate! Add your voice now www.thunderclap.it/projects/37008-together-one-europe