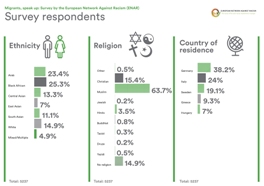 Respondents reported high levels of discrimination and verbal abuse, feelings of being treated worse than their colleagues at work, and being victims of crime on the basis of their ethnicity or migration status.

The European Network Against Racism (ENAR) launched the results of a survey of 5,237 people who have migrated to these countries in the last five years, which provides a unique insight into their experiences of overall well-being, employment, crime and housing. In the context of ongoing discussions on EU migration policies, these findings give a voice to the human beings behind the headlines and policies, to their experiences and challenges living in the European Union.

ENAR Chair Amel Yacef said: “‘Migrants’ is a word that has been used and abused to the point where we can’t even think that we are talking about real people with real experiences of discrimination, targeted hate and isolation. This survey is a sad wake up call to the reality of people whose journeys so far have been marked by hardship and hurt. The general sense I got was one of sadness, hopelessness and feeling powerless.”

This survey begins to explore how ethnicity and nationality may impact on the life chances of migrants. It underlines the need for EU Member States to develop appropriate anti-discrimination policy responses in the areas of employment, housing and criminal justice, and to improve the effectiveness of integration programmes.

Housing
• A majority of respondents experience difficulties finding a home to live in (77% overall) and housing conditions are particularly bad in Greece. Overcrowding is most common in reception and detention centres in Greece and Italy.

Crime
• Respondents are particularly vulnerable to crime in Greece, with assault being the most significant. One third of respondents reported having experienced verbal abuse, with Black Africans reporting the highest levels (37%).
• 36% of respondents who were the victims of crime felt the crime was committed because of their ethnicity and 53% overall because of their migration status.
• Reporting crime is an issue, in particular for undocumented migrants due to fear of deportation. The highest reported distrust of the police is in Hungary (23% of respondents).

Employment
• There are high levels of unemployment among respondents in Greece, and to a lesser extent, Italy.
• Being overqualified for a job is commonly reported amongst those on a study permit; and those who came to Europe for family reunification reasons (54%). Reasons preventing them from doing jobs which match their qualifications included language barriers and legal status.
• Black Africans (27.3%) are more likely to report being treated worse than their colleagues.

Some testimonies by respondents:

“Finding a flat was very difficult. Not knowing the language or being a foreigner makes my chances to get a flat very very low.”

“I think the biggest problem is the local society and people don’t accept very well… foreigners… immigrants. Especially in the work environment.”

“Most villages treat black Africans unfairly because of colour. My little children have gone through what they are not supposed to be going through all because of colour. We are still suffering even after three and half years of integration.”

Notes to the editor:
1. The ENAR survey “Migrants: speak up” was conducted online from 31 July to 7 November 2017 with a sample of 5,237 people who completed the survey. The survey was administered on Survey Monkey in 9 different languages (English, French, Arabic, Turkish, Farsi, Urdu, Somali, Chinese and Italian). An innovative feature of this survey was using Facebook advertisements to reach migrants in the 5 targeted countries (Germany, Greece, Hungary, Italy and Sweden). See the key findings.
2. The European Network Against Racism (ENAR aisbl) stands against racism and discrimination and advocates equality and solidarity for all in Europe. We connect local and national anti-racist NGOs throughout Europe and voice the concerns of ethnic and religious minorities in European and national policy debates.