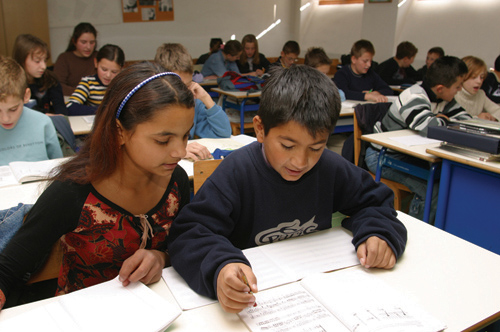 “In this day and age, it is shocking that Romani children in Slovakia are systematically segregated from non-Roma children and put in special schools. No child should ever be denied equal access to education, this is a basic human right,” said Iverna McGowan, acting Director of Amnesty International’s European Institutions Office.

International and domestic human rights bodies and civil society have been calling on the Slovak government for years to address the continuous and widespread discrimination against Romani children in education. In 2013, the Slovak Public Defender of Rights warned that Roma represented over 88 per cent of pupils of special classes and schools for pupils with mild mental disabilities that she surveyed. In 2014, within the UN mechanism of the Universal Periodic Review, Slovakia was asked to address the discrimination of Roma in schools. The government dismissed these recommendations arguing that equal treatment was already guaranteed.

The reality in schools tells another story. Under the 2012 United Nations Development Programme survey as many as 43 per cent of Roma in mainstream schools were enrolled in ethnically segregated classes. In 2012, a Slovak court clarified that the practice of separating Romani children from their non-Roma peers only was unlawful.

Back in 2010, the Slovak government committed to end discrimination but has failed to take action. On the contrary, it has financed and implemented a project of so called container schools. Such schools are being placed directly in Romani settlements instead of ensuring integration of Romani students in ethnically-mixed mainstream schools. This practice is re-enforcing the existing segregation.

“At last, the Commission puts its foot down. The decision is warning the Slovak government and all Member States that discrimination will not be tolerated. It’s the second time now that the Commission is using its legal tools to pressure a government to end the ongoing and systemic discrimination,” said Andras Ujlaky, the ERRC Executive Director.

In September 2014, in an unprecedented move, the European Commission initiated an infringement procedure against the Czech Republic for breaching EU Anti-Discrimination Law by discriminating Romani children in education. In the Czech Republic, Romani children are also significantly over-represented in schools for students with mild disabilities. The Commission’s move has been widely welcomed by civil society organisations which have long been calling for the Commission to live up to its responsibility as the guardian of the EU Treaties.

“Today’s decision by the European Commission against Slovakia is a great milestone for the European Union and its Romani citizens. The Commission’s efforts should not stop here, it should take action against other member states that breach EU’s Race Equality Directive. This is not only about the Roma. It is about justice and rule of law for all people”, said Zeljko Jovanovic, Director of the Open Society’s Roma Initiatives Office.

The onus is now on the Slovak government to enforce the right to access to education without discrimination through comprehensive reform and targeted assistance to the relevant bodies within the educational system.

The decision to launch the proceedings against the Slovak Republic was announced today, 29 April, following a meeting of the College of Commissioners. The proceedings call into question Slovakia’s compliance with: Article 21 (1) of the Charter of Fundamental Rights of the EU, which prohibits discrimination based on any ground such as race or ethnic origin; and the Race Equality Directive (2000/43/EC (RED)) Articles 2.2a, 2.2b, 2.3, 3.1.g, which prohibit discrimination in access to education on the grounds of race or ethnicity.

The Commission will now send a formal notice with its assessment of the situation to the Slovakian government which will be given a deadline to submit its observations. After that, the Commission will conclude whether Slovakia is indeed failing to comply with EU law. In case of an infringement, the Commission may bring the matter before the Court of Justice of the European Union.

Civil society has monitored the situation of Romani children in the Slovak Republic for many years. For recent documentation of discrimination in schools please see:
Amnesty International: Slovak authorities in breach of obligations to Romani school children (2013)
Amnesty International: Slovakia’s ‘container schools’ worsen segregation of Roma children from society(2015)
ERRC submission to UNHCR (2013)
ERRC Submission to the European Commission (2013)