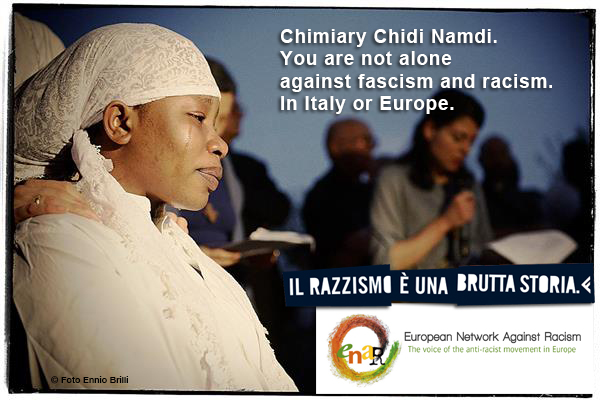 Brussels, 7 July 2016 – The European Network Against Racism (ENAR) strongly condemns the killing of Emmanuel Chidi Namdi, a 36-year-old Nigerian asylum seeker, in Fermo, Italy. We mourn the most recent victim of racist hate in Europe. Our thoughts and solidarity go to his wife Chimiary.

Emmanuel and his wife were hosted in Fermo bishop’s seminary since September 2015 after fleeing Boko Haram violence in Nigeria. On 5 July they were walking down to the coastal town when a group of ultras from the local soccer club and far right extremists insulted Chimiary by calling her an “African monkey”. Emmanuel reacted to the abuse and the group attacked him with a ripped-out road-sign pole, which left him in a coma. They kept on beating him. He died the day after. None of the onlookers and passers-by intervened to help.

The murder of Emmanuel is not an isolated incident. He adds to the countless victims of daily racist violence and hate in Europe. His murder has been incited and nurtured by the widespread representation of migrants and Black people as a threat and fear-mongering in public and political discourse. It is the outcome of the inability of the EU and national governments to face up to the rise of violent racism, xenophobia and Afrophobia in the European Union. ENAR’s latest report on Afrophobia in Europe concluded that anti-immigrant political discourses have led Black migrants, refugees, asylum seekers and Black Europeans to suffer an increase in violent hatred and discrimination across all areas of life.

It’s time for the EU and its Member States to finally take action against hate crime, hate speech and Afrophobia. It’s time to stop hate-mongering and misrepresentations. It’s time to live up to the declared, but not respected, principles and values of the EU and the fundamental rights enshrined in the Charter.

ENAR Chair Amel Yacef said: “It’s time to say out loud that Black and migrant lives matter – not only at sea, but also in the streets of our cities and in the hearts and minds of all of us. The murder of Emmanuel is yet another wake up call to Europe to take racism and violence seriously. When willl it start listening?”

Notes to the editor:
1. The European Network Against Racism (ENAR aisbl) stands against racism and discrimination and advocates equality and solidarity for all in Europe. We connect local and national anti-racism NGOs throughout Europe and voice the concerns of ethnic and religious minorities in European and national policy debates.