Protests against racialised police brutality1 have spread across Europe following the police brutal killing of 46-year-old African American George Floyd in America. Despite initial denials from leaders across Europe, people across Europe have protested and demonstrated to say: “Europe is not innocent”. Evidence has shown that there are disproportionate stops and searches or racial profiling, police violence and incarceration of racialised groups in many EU member states. Police violence has a disproportionate impact on black2 and Arab men but we must also be aware of police violence that has impacted on all racialised groups, migrants, woman of colour as well as transgender people of colour. As a network, ENAR works for an equal and inclusive Europe, working to document police brutality against people of colour in Europe as well as institutional and structural racism. In Europe, we have documented several cases of racial profiling, arbitrary checks and fines, police brutality and violence against people from racialised groups in the context of Covid-193. In the last few months, activists and organisations have made us aware of three people, from Arab descent, who have died following interactions with the police. For decades, ENAR and anti-racist organisations on the ground have been reporting what racialised communities experience at the hands of the police across the European Union. There is significant evidence to show that police violence and discriminatory police stop and search is a race equality and human rights issue. So far, there has been little visibility or public acknowledgement of police brutality of racialised groups and the lack of accountability for these actions results in impunity within the police. The information outlined below aims to highlight the issue of racist police abuse across the EU and our recommendations cover a range of approaches informed by evidence-based solutions and recent developments that demonstrate that a radical system change is required now. Click here to read the full briefing policing_racialised_groups_-_briefing_ojeaku_without_cover_10_revised_22062020.pdf 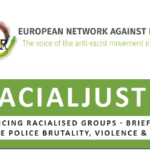