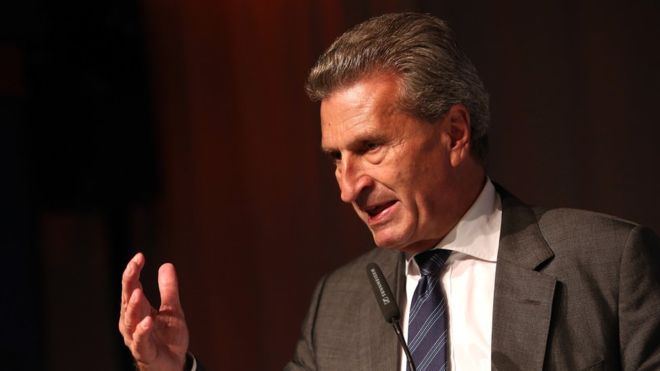 Open Letter to the President of the European Commission: Racist comments by Commissioner Günther Oettinger

ENAR is deeply concerned about the racist, homophobic and sexist comments made by Commissioner Günther Oettinger in a speech given on 26 October. We are calling for a strong statement from the European Commission condemning and sanctioning the use of racist comments, as well as for the resignation of Mr. Oettinger as EU Commissioner.

The European Network Against Racism (ENAR) and its member organisations throughout Europe are deeply concerned about the racist, homophobic and sexist comments made by Commissioner Günther Oettinger in a speech given on 26 October. We are calling for a strong statement from the European Commission condemning and sanctioning the use of racist comments, as well as for the resignation of Mr. Oettinger as EU Commissioner. Despite Mr. Oettinger’s much belated apology, the silence of the European Commission in the last week indicates an overwhelming disregard for European Union values of ‘respect for human dignity, freedom, democracy, equality, the rule of law and respect for human rights, including the rights of persons belonging to minorities’.

Offensive and stigmatising speech is symptomatic of the political discourse prevalent in many EU countries, and contributes to a climate of intolerance and mistrust towards ethnic and religious minorities and migrants in Europe. We have, for instance, seen the very tangible and destructive effect of xenophobic and divisive discourse on minority communities in the United Kingdom, with numerous incidents of racist violence reported in the context of the EU referendum vote.

Racist comments are particularly damaging when they come from politicians and official representatives who, as opinion shapers, have a significant impact on social cohesion. Such figures have a special responsibility not to use language that contributes to fuelling discrimination and dehumanising minorities. They must act responsibly and be held accountable for their statements. It is the role of the Union’s leaders to maintain this accountability.

Racist speech itself is unacceptable. The condonation of the racist remarks of one of the highest representatives of the European Commission is a fundamental breach of trust between the EU and its citizens. While the European Parliament is considering introducing legal instruments to sanction hate speech by MEPs within the Chamber, the European Commission is once again lagging behind when it comes to ensuring respect for EU values and legislation as guardian of the Treaties.

ENAR is calling for:

– An official statement of condemnation by the President of the European Commission.

– The resignation of Günther Oettinger as EU Commissioner for the use of racist, homophobic and sexist language that is in direct contradiction with the values upon which the European Union is founded.

– Systematic investigation and stronger implementation of sanctions in cases of racist or hate speech by members of the European Commission.