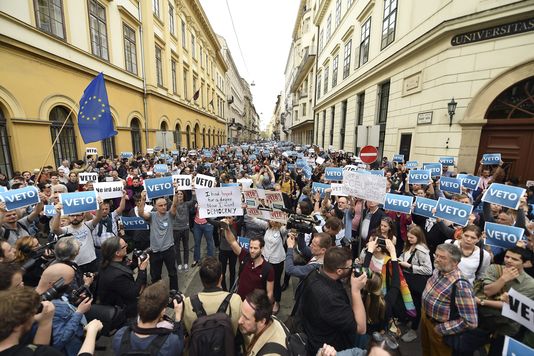 Open letter: Threat to democracy and civil liberties in Hungary

Open letter to the President of the European Commission and Chairman of the EPP Group in the European Parliament raising concerns regarding the threat to democracy and civil liberties in Hungary.

The European Network Against Racism (ENAR) and its member organisations throughout Europe are deeply concerned about recent developments in Hungary aiming to shut down the Central European University and to silence civil society organisations.

The Hungarian government has passed a bill tightening rules governing foreign universities and proposed a law requiring non-governmental organisations who receive funding from outside Hungary to declare themselves as ‘foreign agents’ or risk closure. This will put Hungarian NGOs fighting racism under pressure in a country where they are badly needed. These attacks on academic freedom, freedom of speech, democracy and the rule of law are unacceptable for a Member State of the European Union.

The reluctance of the European Commission and the European People’s Party to uphold core EU values threatens the credibility and legitimacy of the European Union as a whole. What is the point of having strict criteria on democracy, the rule of law and human rights for EU membership, which can then be violated at will without facing the consequences once an EU Member State? Further delaying forceful action will send the message that the EU treaty is a toothless piece of paper and that EU Member States adopting abusive policies are given a free rein.

ENAR is calling for:
– The European Commission to impose sanctions on the Hungarian government for breaching fundamental EU values of freedom, democracy, equality, the rule of law and respect for human rights, on the basis of Article 7 of the EU Treaty.

– The European People’s Party group in the European Parliament to stop protecting Fidesz, Hungary’s ruling government party and member of the EPP group, and take punitive measures if they fail to comply with the principles of the EU Charter of Fundamental Rights and respect the basic tenets of liberal democracies: freedom of association, freedom of research, of intellectual inquiry…

Copy of this letter to:
– Frans Timmermans, Vice-President of the European Commission
– Vera Jourova, EU Commissioner for Justice, Consumers and Gender Equality
– Co-Presidents of the European Parliament Anti-Racism and Diversity Intergroup