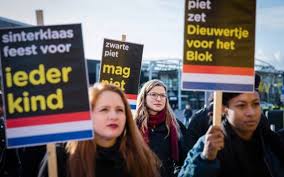 ENAR open letter to Mark Rutte, Prime Minister of The Netherlands and Ferdinand Grapperhaus, Minister for Security and Justice raising concerns regarding the conduct of Dokkum local authorities and police forces on the day of the intocht Sinterklaas on 18 November 2017, as well as the pattern of banning such protests, which violates EU and international law on freedom of assembly and non-discrimination.

We are writing to express our concern regarding the conduct of Dokkum local authorities and police forces on the day of the intocht Sinterklaas on 18 November 2017. This pattern of interdiction of related protests several years in a row violates EU and international law on freedom of assembly and non-discrimination. We urge you to ensure an independent investigation into the actions of law-enforcement regarding anti-Zwarte Piet protests, ensure equal treatment of ethnic minorities, and guarantee that future peaceful assemblies will be safeguarded and protected in accordance with international law.

The European Network Against Racism is a network of over 120 NGOs working to promote race equality across the EU. We support calls for the abolition of the racist figure of Zwarte Piet, as well as other Afrophobic stereotypes, which are common throughout Europe’s media, school textbooks, cultural and political life. Blackface and other stereotypes reproduce colonial imagery and perpetuate racism. The racist elements of the Sinterklaas tradition must go for the celebration to be inclusive of all children in the Netherlands, as the Dutch Ombudsman for children has noted.

We note with concern the fact that peaceful protesters were not able to go to Dokkum because of far-right activists blocking their bus on the highway. These far-right activists, allegedly using threats of violence, blocked the highway, thereby endangering the safety of highway users and bystanders. While the police were present on the scene and escorted the protesters, the length and the nature of police operations indicate gaps in living up to their responsibilities in such a dangerous situation. Reports of police showing alleged lenience towards the far-right activists and intolerance towards peaceful protesters are disturbing.

We condemn the last minute cancellation of the protest authorisation by the Dokkum
mayor and for failing to guarantee their safety. Law-enforcement authorities have the positive obligation to facilitate peaceful assembly and “to protect its participants from any persons or groups that attempt to disrupt or inhibit them in anyway”, as stated by OSCE guidelines on freedom of assembly. These guidelines further read: “potential disorder rising from hostility directed against those participating in a peaceful assembly must not be used to justify the imposition of restrictions on peaceful assembly.”

The right to freedom of assembly should be enjoyed without discrimination. The
interdiction or arrest of peaceful protesters asking for inclusive Sinterklaas celebrations for the third time in four years (Gouda 2014, Rotterdam 2016 and Dokkum, 2017), amid police abuse and excessive use of force (See Ombudsman decision and Amnesty International report), amounts to intimidation and structural racism against people of African and Caribbean descent in the Netherlands.

Such practices are regrettable considering that the Dutch government has made progressive steps to advance the rights of People of African Descent in other areas, for example, launching the UN Decade for People of African Descent in December 2016, and adopting an anti-discrimination plan. It is time that all parts of Dutch society, including law enforcement, complies with these policies, and international human rights standards.

We therefore ask that:
1. An independent investigation into the mayor’s decision is conducted in due time.
2. An independent investigation into the behaviour of law-enforcement is conducted in due time.
3. Future decisions on assemblies are taken with due consideration of the freedom of
peaceful assembly and the principle of non-discrimination.
4. Police internal procedures include clear prohibition of racial profiling and police
officers receive diversity and unconscious bias training.
5. A debate on blackface in the Saint-Nicholas celebrations is held in the National
Parliament.
6. Authorities take steps to forbid blackface in the Sinterklaas celebrations.

We trust that we can start a constructive dialogue in order to address the issues highlighted in this letter, and we remain available to provide any support in this process.

We look forward to receiving your reply.

Amel Yacef,
Chair of the European Network Against Racism