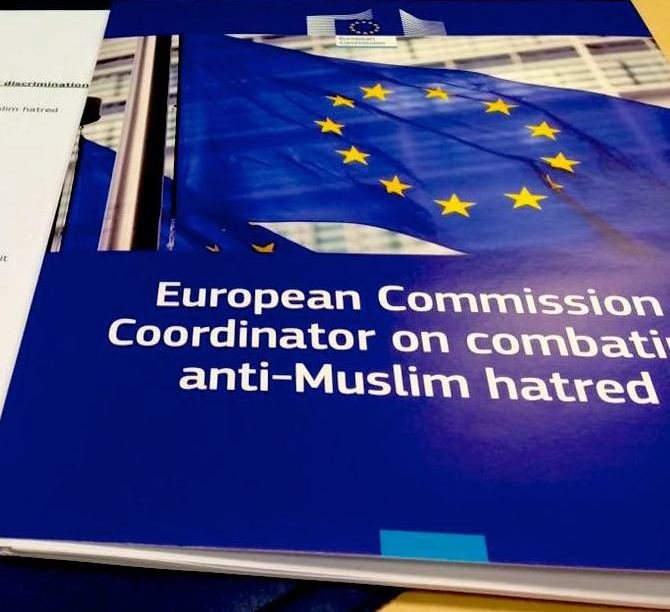 Brussels, 5 July 2018 — The European Network Against Racism (ENAR) together with 20 other organisations wrote an open letter to First Vice-President Timmermans, Commissioner Jourová, Director-General Tina Astola with important recommendations to ensure the European Commission Coordinator on anti-Muslim hatred has a clear mandate and sufficient resources.

On behalf of the signatories part of an informal European coalition against Islamophobia, a platform of anti-racist/human rights/faith-based NGOs combatting anti-Muslim racism and hatred, we are writing to ask the European Commission to provide its Coordinator on anti-Muslim hatred with a clear human rights-based mandate and meaningful resources. The European Commission’s decision to appoint a new coordinator is an opportunity to make this happen.

In December 2015, following the first ever European Commission Fundamental Rights Colloquium, we welcomed the appointment of a European Commission Coordinator on combating anti-Muslim hatred. This was a strong and concrete commitment to tackle increasing racism against Muslim people in Europe. The coordinator took some steps to increase the relationship with NGOs and the recognition of anti-Muslim hatred. Two years after the coordinator’s appointment, this political commitment must now lead to a shift in strategic approach and to tangible actions, which have been lacking so far.

As expressed on several occasions by the coalition, the mandate and the approach of the coordinator has serious gaps to tackle the issue effectively, to ensure meaningful participation of Muslim communities and anti-racism NGOs, and to develop policies to combat Islamophobia. The appointment of one dedicated person does not replace strong political will, actions and effective policies.

Inadequate human and financial resources, expertise, objectives and evaluation processes partly explain disappointing results to date. The lack of transparency concerning meetings with national governments, the failure to organise a meeting between NGOs and Commissioners, the framing of anti-Muslim hatred as a religious issue instead of a human rights one, the absence of European Commission representatives at several events on Muslim women’s rights and the engagement of the coordinator with very questionable figures fuelling Islamophobia, are among the most problematic illustrations of these systematic gaps.

In addition, the coordinator has conflated the fight against Islamophobia, anti-blasphemy laws, Islamism and counter-terrorism in a number of social media posts and declarations. In a context of generalised suspicion of Muslims, EU policy makers advancing equality and non-discrimination must see Muslims as human beings who enjoy fundamental rights as any other person. The fight against Islamophobia is about politically addressing structural forms of discrimination and racism affecting Muslims or those perceived as such.

If the European Commission is serious about upholding European core values of equality and non-discrimination, it needs to make important strategic changes and concrete actions including:

● Profile of the coordinator. Ensure that the coordinator is appointed based on relevant skills and competences in order to work meaningfully on the issue of Islamophobia as a form of racism. This will also facilitate the relationship and trust with NGOs who have extensive knowledge about the issue and its manifestations. It would be desirable to appoint a coordinator from the affected communities.

● Clear mandate. Clarify what the role of the coordinator entails in terms of representation, official communication and actions that can be undertaken, also defining the remit of issues to be covered.

Finally, we officially request a meeting with First Vice President Frans Timmermans and Commissioner Věra Jourová to discuss the above-mentioned recommendations. This is a necessary signal at a time when parties using blatant islamophobic rhetoric have come to power.