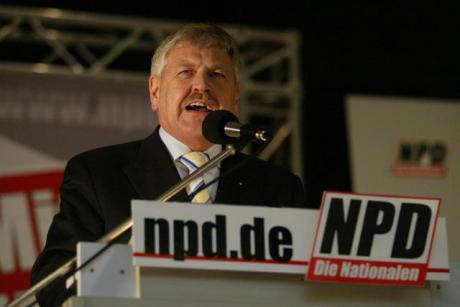 European Parliament President Martin Schulz, anti-racism campaigners and Jewish organisations are outraged that a neo-Nazi MEP has taken a seat on the Parliament’s Civil Liberties, Justice and Home Affairs Committee.

Udo Voigt, the former leader of the Nationaldemokratische Partei Deutschlands (NPD), has praised Adolf Hitler, was convicted for glorifying the Waffen SS, and infamously claimed “no more than 340,000 Jews” had died in the Holocaust. Historians agree that the total number of Jews exterminated under Hitler was about six million.

Germany’s first far right MEP led the NPD from 1996 to 2011. German intelligence classifies the organisation as a far right extremist party. There was a failed attempt to ban the party in 2003. Another attempt, arguing its ideology is identical to Hitler’s, is currently in the German courts.

Parliament President Martin Schulz, a member of Germany’s Socialist Democratic Party, said, “Everyone who denies the Holocaust and who is against human dignity, democracy and plurality will encounter the strongest of resistance from me.

“The European Parliament is the place where the representatives of the European people work hard to ensure a good and peaceful future for us on our continent. There is no place for racists and anti-Semites in this house.”

The Parliament’s Civil Liberties, Justice and Home Affairs Committee is responsible for the protection of citizens’ rights, human rights, and measures to combat discrimination.

EurActiv asked newly-appointed committee chairman Claude Moraes, a British Indian Labour MEP, for his reaction. He was selected today (7 July) and his response will be published once it is received.

MEPs who, like Voigt, are unattached to any political group are allocated a set number of committee seats to be divided among all independent politicians. Voigt who planned to nominate Hitler’s deputy Rudolf Hess as a candidate for the Nobel Peace Prize, did not respond to a request for comment.

A spokesman for the European Jewish Congress said, “It does the European Parliament no credit to have people sitting on its civil liberties committee who have obviously not only shown no commitment to civil liberties, but have sought to undermine them and to purvey a racist and intolerant agenda throughout their political career.

“We call upon members of the civil liberties committee, and indeed all parliamentary groups within the European Parliament, to ensure that Mr Voigt does not get the publicity for his repugnant views that he so clearly seeks at every opportunity.”

Michael Privot, director of the European Network Against Racism, told EurActiv, “We are deeply concerned that an MEP from the German neo-Nazi party NPD, but also a small number of other MEPs propagating xenophobic or racist ideas, laws and policies, will be sitting on the civil liberties committee, taking decisions on the fundamental rights of people living in Europe.

“We hope they will not disrupt and filibuster the work of the committee, and trust that progressive MEPs, including the newly elected Chair Claude Moraes, will ensure that this will not happen.”

The European Conservatives and Reformists Group said it was regrettable that Voigt had been elected at all.

The spokesman for Nigel Farage’s Europe of Freedom and Direct Democracy group said, “In a political culture which rejects direct democracy and national self-determination, frustrated people get funnelled towards supporting extremist parties like the NPD.

“It’s very worrying that a rational human being with any knowledge of history would advocate the views of Mr Voigt. Hitler and Nazism were evil in their rejection of natural law, human rights and in their desire for a United European empire. Hitler and his supporters are dangerous people indeed.”