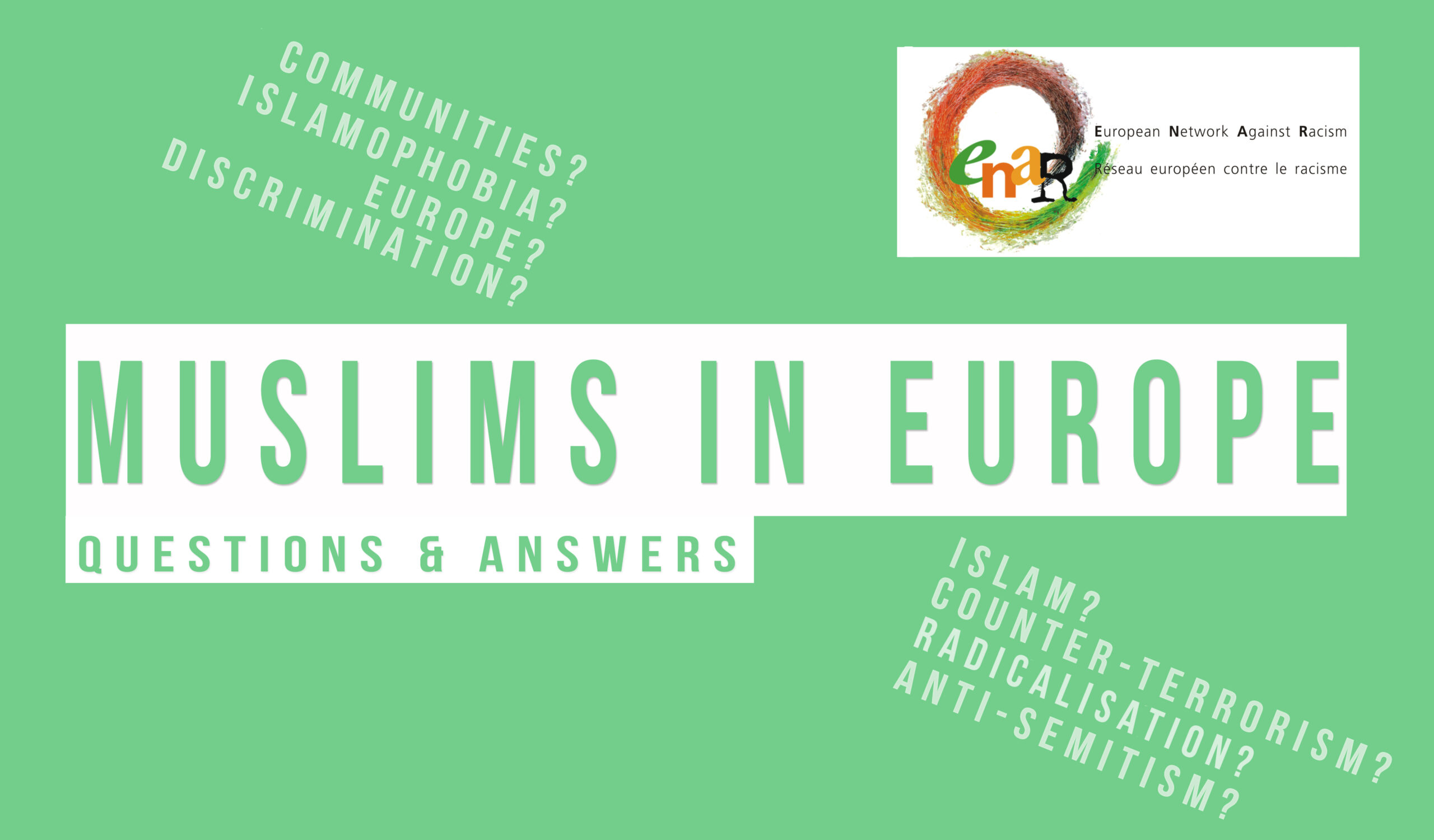 Muslims in Europe: Questions and Answers

As anti-Muslim manifestations increase in Europe, particularly in the aftermath of the Paris and Copenhagen attacks, we clarify some misconceptions and answer some of the most frequent questions about Muslims in Europe.

Q: Who are Muslim Europeans?

Muslims have been present in Europe since the 7th century. Diplomacy and trade exchanges have always existed between the Muslim world and Europe. After World War II, a large immigrant labour force coming primarily from Mediterranean countries with majority Muslim populations were recruited to support rebuilding efforts in Europe. Nowadays, Muslim communities are as diverse as European countries are. Different ethnic and cultural origins, nationalities, political views, social classes mean that there is no such thing as one ‘Muslim community’. While in Europe, Islam is often associated with Arabs, the latter make up only 15% of the world’s Muslim population. Muslims refer to different understandings and lectures of the Islamic literature and to a great variety of theological, juridical and spiritual schools, obedience and traditions. Muslims are spread across the spectrum of potential religious practice: from total non-practice to intensive practice – the level of practice evolving also during a life time. Levels of practice differ also according to the religious practice: whereas estimates consider that only 10% of Muslims are engaging in regular prayers, more than 70% tend to respect fasting during the month of Ramadan.

Q: How many Muslims are there in Europe?

Most EU countries do not collect data disaggregated by religion in censuses, so it is impossible to know exactly how many Muslims live in Europe. However, research based on proxies has estimated that around 19 million Muslims live in Europe, which represents 6% of the total European population. Populist and far-right parties tend to increase this number to support the argument of an “islamisation of Europe”. Recent public opinion surveys have shown that the number of European Muslims is often overestimated. A 2014 survey found that French respondents thought that 31% of their compatriots were Muslim, while actual figures show that only 8% of French residents are Muslims – including non-practising Muslims. UK respondents thought there were 21% Muslims in Britain, when they constitute only 5 % of the British population.

While there is no single interpretation of Islam, renowned Islamic authorities across the world have repeatedly affirmed that terrorism cannot be justified by the teachings of their religion, which aims to promote justice and peace. Muslim leaders and scholars often speak out against terrorism and seek to counter misinterpreted or twisted teachings based on a theology of violence and death that fringe groups use to justify their violent actions. Most Muslims feel as threatened as anyone else by these violent extremists who say they act in the name of Islam. Muslims have been the target of terrorist attacks too, and are in no way protected because of their religion. To date, worldwide, Muslims suffer the highest death toll due to jihadist terror groups. Some of the victims of the Paris attacks were Muslims.

Q: If all Muslims are not terrorists, are all terrorists Muslims?

A survey conducted by the Center for Research and Globalization found that the terrorists acts perpetrated by Muslim extremists constitute only 2.5% of all terrorist attacks on U.S. soil between 1970 and 2012. In 2013, 152 terrorist attacks occurred in Europe with only one attack being religiously motivated while 84 were motivated by ethno-nationalist or separatist beliefs. The massive media coverage of Muslims extremists’ acts contributes to feeding the myth that all terrorist acts are perpetrated by Muslims. Far-right movements are also a form of extremism present in Europe, which poses a similar threat to society and peaceful coexistence.

Q: Do Muslims agree with the Paris and Copenhagen terror attacks?

Some Muslims have felt offended by some of Charlie Hebdo’s cartoons. But this in no way means that they support the deadly attacks. Most Muslim organisations publically condemned these murders, recalling that words should be countered with words, and that Islam shouldn’t be used as a way to justify terror attacks. Many of these organisations were present on 11th January to peacefully march in Paris and other French and European capitals. A number of European Muslim intellectuals have also insisted on the importance of freedom of expression.

Anti-Semitism is not new in Europe and is still very much present across European society. Muslims are not immune to anti-Semitism. Some Muslims are influenced by theological discourses rooted in anti-Semitism, far-right ideologues, negationists and those spreading confusion between Israel and Jews in general. However, a recent Pew Research Center study shows that negative opinions on Jews are growing in Europe, reaching 25 % of unfavourable opinion in Germany, where only 6 % of the population is Muslim. In Spain, where less than 3 % of the population is Muslim, close to 50 % of the population hold negative opinions about Jews. In France, research and surveys have showed that an ‘old’ type of far-right anti-Semitism is still dominant and goes hand in hand with other forms of prejudice, including Islamophobia. Affirmations that Muslims are the only source of anti-Semitism in Europe are based on an attempt to pit Jews and Muslims against each other, divide society and spread both Islamophobia and anti-Semitism.

Q: What are the consequences of the Paris attacks on Muslim communities?

Muslims have been publicly called to condemn the attacks, implying that Muslims intrinsically support the perpetrators of the attacks. As a consequence, some Muslims have feared retaliation. The attacks took place in a context of growing Islamophobia in Europe (47% increase in recorded Islamophobic acts in France in 2013 compared to 2012), anti-Muslim marches organised by the far-right Pegida movement, and regular attacks of mosques in Sweden. From 7 January 2015 to 7 February 2015, there were 153 Islamophobic incidents against individuals and places of worship in France, which represents a 70% increase compared to January 2014.

Discrimination and social exclusion are key factors leading young Muslims, among others, to feel excluded and humiliated in Europe and become easy targets for radicalisation. It is necessary to address social segregation and discrimination in employment to include those who no longer believe in the structures that regulate our societies: families, education and employment. Former and current armed conflicts in the Middle East and beyond have left abandoned populations in chaos in countries that are not able to guaranty a minimum level of security. These conflicts are used in narratives and easily spread by violent extremists to justify terrorist acts. This propaganda is widely spread via social media and mostly appealing to young people’s emotions. Worrying trends show an increase of the number of European young Muslims leaving to join jihadist organisations. However, estimates show that these represent less than 0.1% of the total Muslim youth.

Q: What is Islamophobia? How can it be a form of racism as Islam is not a race?

Islamophobia is a specific form of racism that refers to acts of violence and discrimination, as well as racist speech, fuelled by historical abuses and negative stereotyping and leading to exclusion and dehumanisation of Muslims, and all those perceived as such. Islamophobia can also be the result of structural discrimination. Islamophobia is a form of racism in the sense that it is the result of the social construction of a group as a race and to which specificities and stereotypes are attributed. These characteristics are considered genetic (for instance “Islam is violent, thus Muslims and their kids are violent”). Consequently, even those who choose not to practice Islam but who are perceived as Muslim are subjected to discrimination. Islamophobia has nothing to do with criticism of Islam. Islam, as a religion, as an ideology, is subject to criticism as any other religion or ideology.

Q: Is racial profiling the solution to prevent radicalism?

Data mining and surveillances practices have not yield conclusive results on combating terrorism or radicalisation. These data collection practices can lead to discriminatory practices and prohibited processing of data revealing race, ethnic origin or religion through the use of proxies. Information such as residency status, home address, nationality, place of birth, phone calls to certain countries, time of bank operations or physical appearance (a beard, a veil, etc.) can be used to racially profile individuals. Racial profiling is a form of racial discrimination that is prohibited under international law. It is also ineffective and counter-productive in that it alienates the very communities whose support is necessary for fighting crime and terrorism. Racial profiling is not effective in terms of law enforcement. Policing depends on cooperation from the public to report crime, provide suspect descriptions and give witness testimonies. Research shows that poor police-citizen contacts and bad treatment by law enforcement officers can have a negative impact on public confidence in law enforcement and also result in reduced cooperation with the latter.