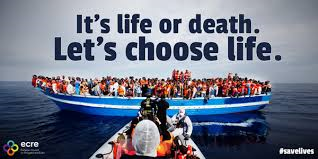 Migrant deaths in the Mediterranean: It’s urgent to save lives

Brussels, 20 April 2015 – The European Network Against Racism (ENAR) is deeply concerned by the recent tragic deaths of hundreds of people in the Mediterranean. The latest tragedy is yet another wake-up call to EU institutions and Member States to take responsibility to prevent these deaths instead of letting them happen time after time.

ENAR Chair Sarah Isal said: “How many more deaths will we have to witness before the EU and its Member States finally take action? There is a shocking lack of reaction and solidarity and the “fortress Europe” approach is becoming increasingly lethal.”

The reduction of search and rescue operations and stricter border controls have not served to reduce the arrival of new asylum seekers or migrants. On the contrary, there has been an increase in the number of deaths at sea since the end of Italy’s ‘Mare Nostrum’ humanitarian operation. The EU’s ‘Triton’ operation, which replaced the Italian ‘Mare Nostrum’ operation from the end of last year, is not working – it has too few resources and as part of Frontex, its primary focus is on protecting borders.

The priority for the EU and its Member States should be to urgently resume a joint European search and rescue operation in the Mediterranean and respect its international humanitarian obligations.

In addition, the EU’s approach, which focuses only on border controls, cracking down on smugglers and tackling the ‘root causes’ of migration, is inadequate as it does not take into account the EU’s responsibility to uphold human rights inside and outside its borders and its duty to save human lives. EU institutions should also improve solutions for safe and legal channels for migrants and asylum seekers in the new European Migration Agenda.

Notes to the editor:
1. The European Network Against Racism (ENAR aisbl) stands up against racism and discrimination and advocates for equality and solidarity for all in Europe. We connect local and national anti-racist NGOs throughout Europe and act as an interface between our member organisations and the European institutions. We voice the concerns of ethnic and religious minorities in European and national policy debates.