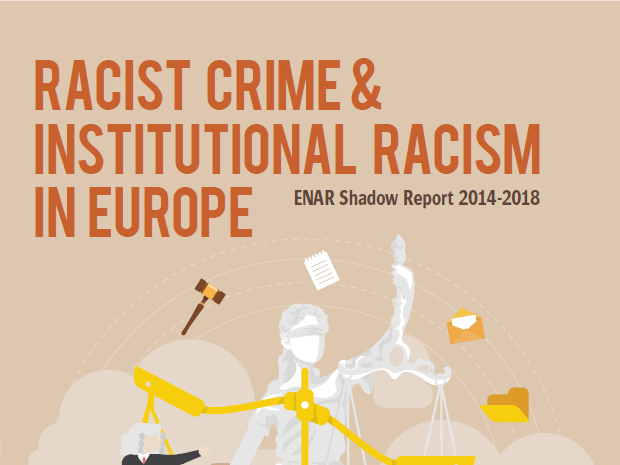 Brussels, 12 September 2019 – Institutional racism prevails in criminal justice systems across the EU and impacts how racist crimes are (not) recorded, investigated and prosecuted, according to a new report published by ENAR today.

“Twenty years after the Macpherson Report revealed that the British police was institutionally racist, we now find that criminal justice systems across the European Union fail to protect victims of racist crimes – this despite the increase in violent racially motivated crimes”, said Karen Taylor, Chair of the European Network Against Racism.

ENAR’s report, covering 24 EU Member States, provides data on racist crimes between 2014 and 2018, and documents institutional practice during the recording, investigation and prosecution of hate crimes with a racial bias. It reveals how subtle forms of racism persistently appear in the criminal justice system from the moment a victim reports a racially motivated crime to the police, through to investigation and prosecution. This leads to a ‘justice gap’: a significant number of hate crime cases end up being dropped as a hate crime.

Data over the period 2014-2018 suggest that racially motivated crimes are on the rise in many EU Member States. In addition, major events such as terrorist acts – and the political rhetoric and responses to these attacks – can cause spikes in the numbers of recorded racist crimes.

Most EU Member States have hate crime laws, as well as policies and guidance in place to respond to racist crime, but they are not enforced because of a context of deeply rooted institutional racism within law enforcement authorities.

The mishandling of racially motivated crimes by the authorities, and in particular the police, starts with the recording of racist crimes. Evidence suggests that the police do not take reports of racist crime seriously or they do not believe victims of such crimes. This practice appears to be especially true if certain groups, such as Roma and black people, report these crimes. Racial stereotyping is pervasive in policing at all levels.

In addition, the lack of institutional response and negative experiences of victims with the police mean that civil society organisations have to fill in the gap to ensure racially motivated crimes are properly recorded.

The racial bias can ‘disappear’ in the course of the police recording and investigating the crime. The police find it more straightforward to investigate crimes, such as violation of public order or crimes against property, than uncovering the evidence of the bias motivation.

There are also several factors that hinder the successful prosecution and sentencing of a hate crime with a racial bias, including lack of clear definitions of hate crimes with a racial bias; lack of training and limited capacity; and under-use of the aggravated ‘hate’ clause.

“We need a significant change within the criminal justice system, if racial justice is to prevail for victims of racist crime in Europe. Governments and institutions can better respond to hate crimes if they commit to review the practice, policies and procedures that disadvantage certain groups,” said Karen Taylor. “People’s safety is at stake and justice must be served – for all members of society.”

1. ENAR’s 2014-18 Shadow Report on racist crime and institutional racism is based on data and information from 24 EU Member States: Austria, Bulgaria, Croatia, the Czech Republic, Cyprus, Denmark, Estonia, Finland, France, Germany, Greece, Hungary, Ireland, Italy, Latvia, Lithuania, Malta, the Netherlands, Poland, Portugal, Romania, Slovakia, Spain and the United Kingdom.
2. The report and key findings are available here: https://www.enar-eu.org/Shadow-Reports-on-racism-in-Europe. The report also includes case studies and testimonies highlighting the experiences of victims of racially motivated crime, the lack of protection and failure of measures for justice for these victims.
3. The Macpherson Report, ordered by the British government and published in 1999, is the report of a public inquiry into the racist murder of Stephen Lawrence, a black teenager, and the ensuing police investigation. It concluded that the Metropolitan Police was “institutionally racist” and made 70 recommendations for reform, covering both policing and criminal law.
4. The European Network Against Racism (ENAR aisbl) stands against racism and discrimination and advocates equality and solidarity for all in Europe. We connect local and national anti-racist NGOs throughout Europe and voice the concerns of ethnic and religious minorities in European and national policy debates.

Lenient sentence for murderer of Nigerian refugee (Italy)
The main perpetrator of the racially motivated murder of a Nigerian man, affiliated with a far-right group, was arrested on charges of manslaughter, aggravated by racist motives. However, his lawyer, together with part of the local and national media, pleaded legitimate defence. The man later received a reduced sentence of four years in house arrest.

Police fails victim of racist and homophobic attack (Netherlands)
“I have to be on watch 24/7 just because of who I am, it drains me. I’m just not important”.
Omair was harassed on grounds of his origin and sexual orientation on a bus in Utrecht. The police officer did not want to document witnesses’ statements or check the bus camera images. Four months later, Omair received a statement by the police that the case could not be pursued due to lack of evidence. Omair requested a meeting at his police office to discuss the statement with a member of the Pink in Blue Network, a network of LGBTQI police officers. The officer acknowledged the case should have been investigated as a hate crime and that the incident was wrongly recorded.

Police mistreatment of Roma people (Slovakia)
More than 60 police officers physically attacked 30 Roma people, including women and children, during a police raid. The police entered the houses without permission and caused material damage. Several complaints were submitted to the police inspection for investigation. The police inspection found that the police had acted in accordance with the law. The inspection was based only on investigating information from police officers. No other witness was included in the inspection. One victim filed a criminal complaint, but this was dismissed as unfounded.