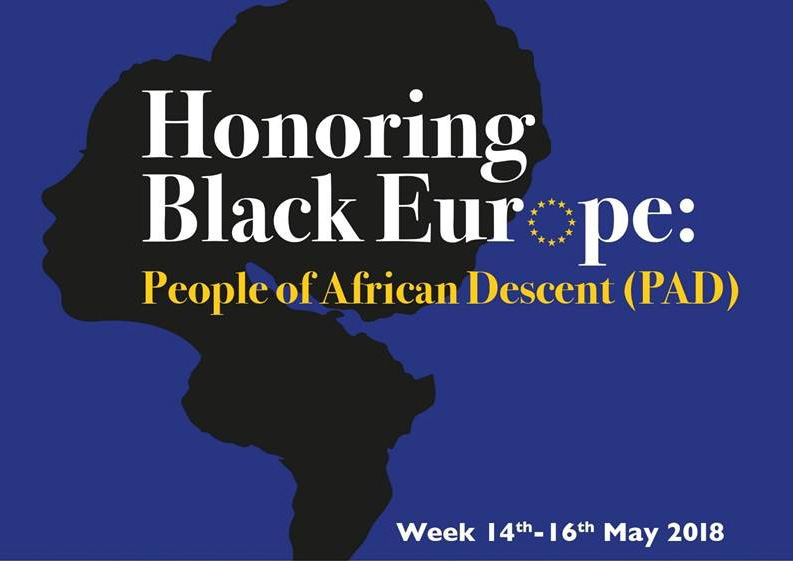 Brussels, 14 May 2018 – From May 14-17th, the European Union is hosting its first ever People of African Descent (PAD) Week at the European Parliament. This is a key initiative to increase awareness of the 15 million people of African descent living in Europe and discuss solutions to address the racial discrimination and violence they face.

At a time when Black people in Europe experience hate crime, violence and deaths in police custody, use of racial profiling, discrimination in education and employment, it is urgent to ensure justice and equal rights for Black people. Valuing the contributions of Black people to Europe has also been long overdue.

This week must lead to concrete measures, at both EU and national levels, to better recognise and address racism against Black people as a specific form of racism.

“In addition to honoring the history and contribution of Europe’s Black population, the People of African Descent Week reaffirms European values by developing strategic and coherent responses to make our society more inclusive in the face of rising racial prejudice and violence across Europe,” said MEP Cecile Kyenge, a founder of PAD Week and member of the European Parliament’s Anti-Racism and Diversity Intergroup. “I am greatly concerned by recent events where we see European citizens turning against one another and people from other places simply because they look different or were born elsewhere.”

“I am honored to join my European colleagues in hosting a Week dedicated to Black populations in Europe,“ said U.S. Congressman Alcee Hastings, a founder of the Transatlantic Minority Political Leadership Conference. “As part of U.S. Helsinki Commission leadership, we have documented Black people being treated differently from borders to employers. Whether in America or Europe, we must all do more to uphold the democratic values of our nations. Skin color should not determine one’s access to rights, protections, and opportunities in a democracy.”

“It is only fitting that we consider the history and contributions of Europe’s Black populations as we commemorate the UN International Decade for People of African Descent,” said U.S. Congresswoman Gwen S. Moore. “Enslavement and civil rights have for too long been seen as just American problems, when in reality these histories are also European history. A Week dedicated to People of African Descent not only highlights our shared history, but also helps us to move towards a shared future where the past and present contributions of all can be recognized. I am proud to serve as an honorary host for the week.”

“As Ranking Member of the House Subcommittee on Europe, Eurasia, and Emerging Threats and co-chair of the EU Caucus of the U.S. Congress, I focus daily on the wide spectrum of the U.S.-EU relationship, from BREXIT negotiations and counterterrorism cooperation to trade and migration issues,” said Congressman Gregory Meeks. “Black, White, or Other… decisions we make around these policies ultimately impact us all. I am pleased to host this Week to ensure that Black voices are also part of these conversations.”

“Only last month I led efforts to host Roma Week in the European Parliament. It has been close to two decades since we first identified that institutional discrimination in education and other sectors was harming employment and other opportunities for Roma,” said MEP Soraya Post. “I am hosting PAD Week to also raise awareness of ongoing disparities in education for Europe’s Black populations, but also to raise the larger question of why European institutions are not working for everyone and the need for a closer look at the role race plays in the success of our systems.”

“The European Union have launched an important initiative to raise awareness of the need to tackle the racism and discrimination experienced by 15 million Black people living in Europe,” said Michaël Privot, Director of the European Network Against Racism. “We hope this week will result in concrete measures at both European Union and government levels, in particular to address disparities in access to education, increasing levels of hate crime, and violence and discrimination in the criminal justice system. It’s time Black people in Europe can be fully part of our society.”

Daniel Gyamerah, Chair of Each One Teach One e.V. (EOTO), said: “I am grateful for the opportunity to co-host this historical event. This Week embodies EOTO’s vision by fostering the Black European movement while pushing for actions on a policy level at the same time. It is EOTO’s vision to empower Black people through community building and to foster Black leadership in every realm of society – culture, education, economy and politics.”

The European Network Against Racism (ENAR)
ENAR is the only pan-European network of anti-racist organizations working to combat racism in the European Union. ENAR advocates for improved legislation, policy and practice against racism in EU member states. With over 150 civil society member organizations across the European states, ENAR seeks to build a broad and powerful coalition of actors committed to an anti-racist vision of European society.

Each One Teach One
EOTO is a community-based education and empowerment project in Berlin. In March 2014, the EOTO opened its doors as a neighborhood library and since then has been a place of learning and engagement. EOTO presents literature of people of African descent and conveys knowledge in intergenerational dialogue. The reference library includes works by authors of Germany, the African continent and diaspora and includes over 2500 German -language books on Black History and the Black presence within and outside Germany.