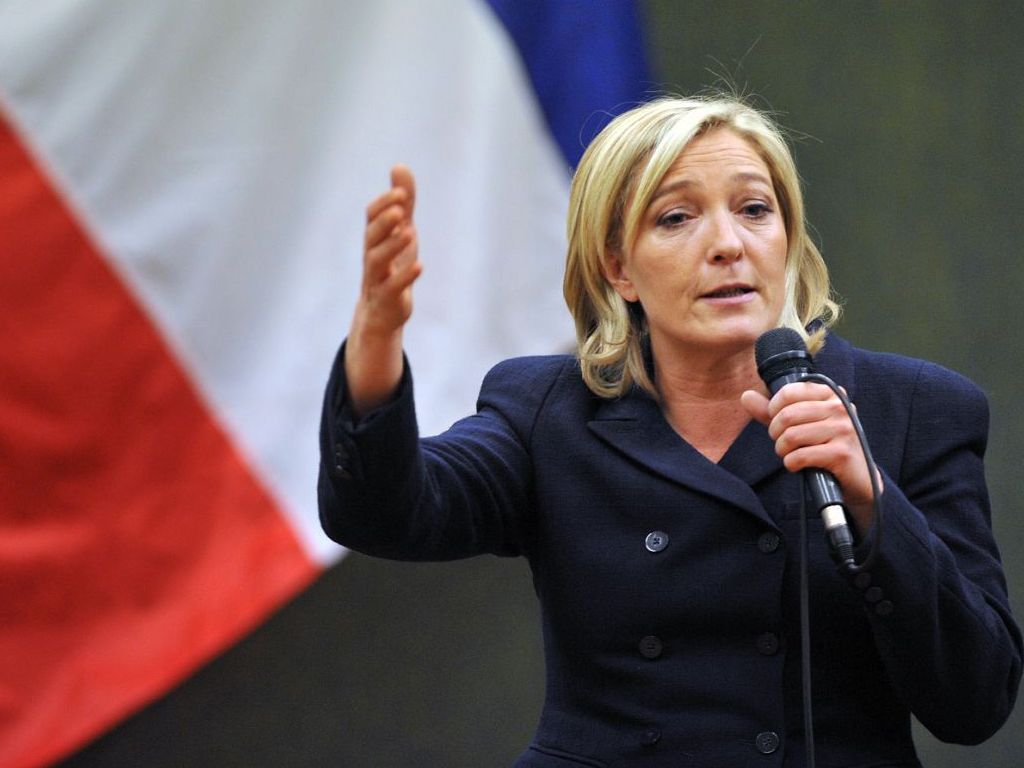 France’s far-right National Front, coming off a historic electoral victory at home, is marching toward a new target: the European Parliament. Party chief Marine Le Pen is leading the charge for continent-wide elections next month like the general of a conquering army, and hoping to attract kindred parties around Europe in a broad alliance.

As the extreme right rises across Europe, Le Pen wants to seize the momentum — raising the voice of her anti-immigration National Front and amplifying it through a broad parliamentary group. These parties, leveraging public frustration with the EU, want to weaken the bloc’s power over European citizens from within Europe’s premier legislative institution.

“My goal is to be first” in France’s vote for the European Parliament, “to raise the conscience over what the European Union is making our country live through,” she said on French television the morning after her party won a dozen town halls and more than 1,000 city and town council seats in municipal elections.

The voting for the 751-seat European Parliament, based in Strasbourg in eastern France, takes place in each of the EU’s 28 member states, stretching over four days beginning May 22. Even if far-right groups expand their presence in Parliament, they’re unlikely to break the mainstream majority, and their divergent nationalist agendas may clash with each other on the legislative floor.

The European Parliament was long derided as a mere talking shop, but it has steadily gained power in recent years and its approval is now needed for all major EU legislation — from financial market regulation to agricultural policies or decisions on how big warning signs on cigarette packs have to be. But the European Parliament falls short of the clout of national legislatures in two important ways: Its lawmakers cannot propose new laws and it has only limited say over the EU’s budget.

Le Pen’s main goal is to use larger numbers in parliament to shift the political discourse toward far-right complaints and establish a long-term foothold.

Europe’s economic downturn has fueled populist parties of all stripes across the continent, from the United Kingdom Independence Party, known as UKIP, to Greece’s Golden Dawn. But it’s not all about the economy: Europeans are in the grips of a chronic identity crisis fed by immigration, largely from former European colonies.

“The multicultural question, the question of the transformation of the European cultural landscape, notably with the arrival of a Muslim population,” said far-right expert Jean-Yves Camus, weigh as heavily on Europe’s anxieties as economic frustrations.

Le Pen regularly denounces what she calls the EU’s rule by “diktat.” And she bemoans the perceived consequences of the bloc’s single market and open frontiers: high unemployment, plunging purchasing power, unfair trade competition and a general loss of sovereignty.

“If you take away from people their ability through the ballot box to change their future because they have given away control of everything to somebody else, I’m afraid they tend to resort to unpleasant means,” Farage said, warning of protests and the rise of neo-Nazis. Clegg responded that the EU of the future would be “quite similar” to today’s EU with trade remaining “at the absolute heart” of it.

She won’t give a target figure for seats but experts say the National Front could get up to 20 deputies in the European voting, and foresee strong performances from other European extreme-right parties.

After the National Front’s success in France’s local elections, Italian Premier Matteo Renzi warned that “Europe needs to be aware of the widespread sense of contestation and anti-politics” — and should put growth and fighting joblessness at the center of policymaking.

Like the National Front, numerous other far-right parties also target Muslims. They claim that Islamic immigrants stream into their countries to abuse social services and supplant Western culture.

Le Pen wants to rally far-right parties around a common anti-EU stance — and create a parliamentary grouping that gives the rightists clout. Groups in the European Parliament receive funding for staff and obtain privileges, from the right to chair committees to more speaking time.

But creating a group, which requires at least 25 deputies from seven countries, is no easy task. For one thing, it’s still unclear whether the far-right will obtain the numbers necessary to potentially form a group. Then there’s the equally difficult task of uniting the parties under one banner.

In November, Le Pen joined with the anti-EU, anti-Islam Freedom Party of Dutchman Geert Wilders, who announced plans to “liberate Europe from the monster of Brussels.”

Yet Wilders’ Freedom Party took a hit in February after he offended many Dutch people with a chant of “Fewer! Fewer! Fewer!” Moroccans in the Netherlands. One of four of the Freedom Party’s European deputies quit the party as did three of the group’s 15 lawmakers in the Dutch parliament, and the party slipped to second in opinion polls, from first place.

Le Pen has been short on details about who else might form a group with her and Wilders — saying only that the excessively extreme positions of Greece’s Golden Dawn and Hungary’s Jobbik make them unacceptable partners. The high-profile UKIP has refused to join with Wilders and Le Pen, considering their views too extreme.

But other parties could be coaxed in, such as Austria’s Freedom Party, or FPO, and Italy’s Northern League, according to Marco Incerti of the Center for European Policy Studies. Austria’s FPO currently leads popularity polls and has 42 seats in the national parliament, although only two seats in the European Parliament.

The National Front is launching a European youth movement in Vienna on Friday. It’s called the Young European Alliance for Hope — or YEAH — and includes the FPO, Belgium’s Vlaams Belang and Sweden Democrats.

Some experts say it would be challenging to get inherently inward-looking nationalist parties to cooperate on a European level.

And while they share a vision of hostility to the EU, they can be expected to show differences on other issues.

“Their current agendas are about getting out of Europe,” said Incerti, “but there is little cement between them.”

So far, there is nothing to suggest a far-right group could break the hold of the largest two blocs in parliament: the center-right European People’s Party that groups together conservative politicians and has 275 seats, and the center-left Progressive Alliance of Socialists and Democrats, which has 194 seats.

However, there is a long-term concern.

“Five years from now, people could be voting in even larger numbers for such parties,” Incerti said.