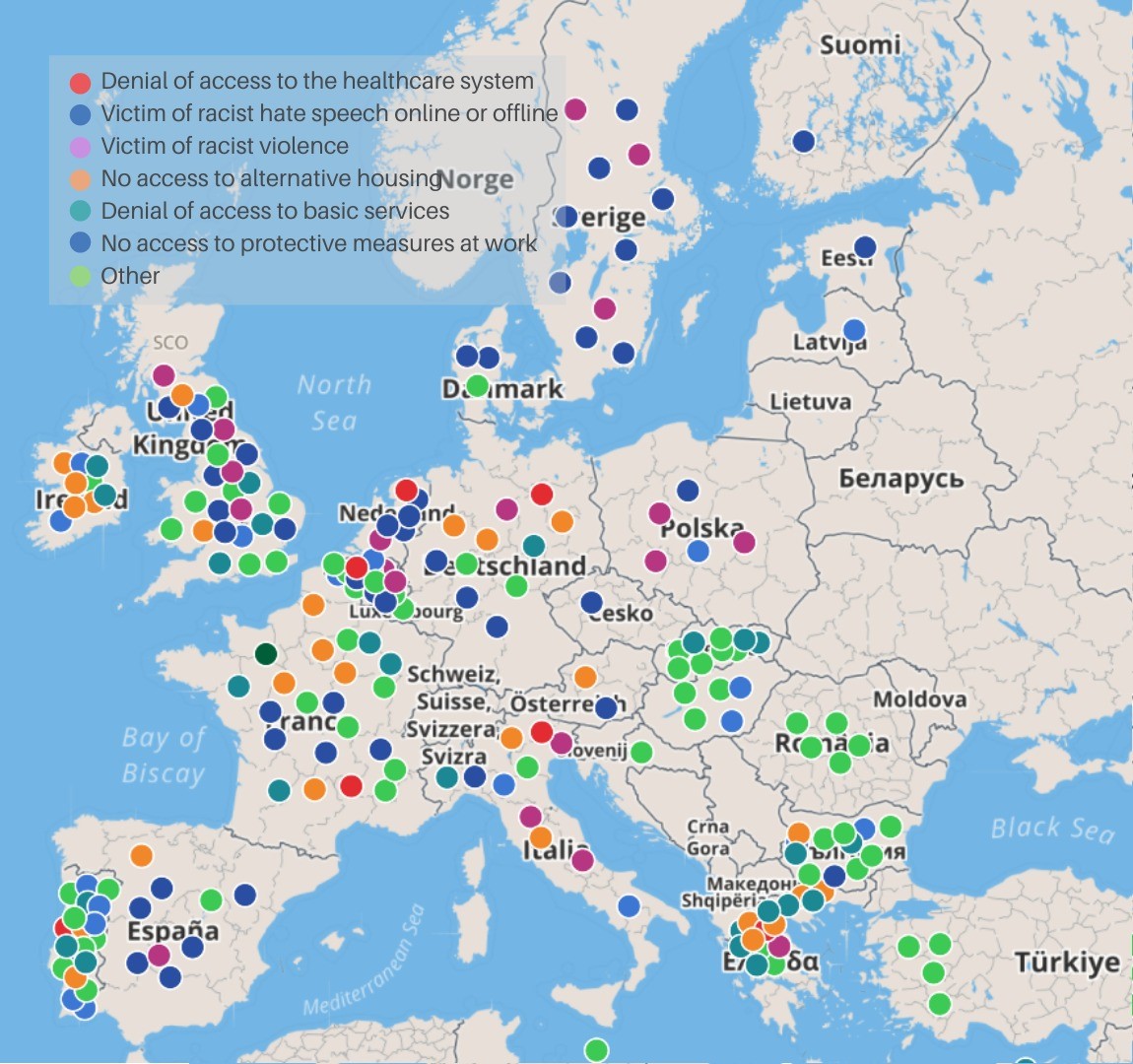 Brussels, 12 May 2020 – Data on the impact of Covid-19 on racialised groups exposes how government responses are overlooking and in some cases violating the fundamental rights of ethnic and racial minorities in Europe.

The European Network Against Racism (ENAR) has launched an interactive Europe-wide map which includes cases of violations of racialised groups’ fundamental rights by country in a range of key areas including healthcare, housing, employment, racist violence and speech, as well as racial profiling and police brutality.

The cases underline how this pandemic is exacerbating and shining a light on existing structural racism and inequalities in the labour market, in housing, or in institutions such as the police, meaning that some groups are being hit harder. Available evidence also shows that racial and ethnic minorities are more likely to die from the coronavirus.

[(Mamadou, 35 years old, works in the construction sector in Portugal. He has been laid off temporarily, making it difficult for him and his family to make ends meet. His partner works in a hospital and is more exposed to the virus. They also live in overcrowded accommodation, making it harder for them to respect social distancing measures.)]

“Disease affects us all and we should all have the care and support we need, leaving no one behind”, said Karen Taylor, Chair of the European Network Against Racism. “In their responses to the pandemic, governments should acknowledge the greater risks and needs of racialised groups and put measures in place to ensure they do not bear the brunt of the pandemic’s impact.”

– Employment: Due to existing racial discrimination and structural barriers, racial and ethnic minorities are more likely to be in low-paid and precarious jobs or key workers, and are therefore more at risk of contracting the virus and of facing financial insecurity as a result of government measures. Many migrants and Roma people in particular do not have access to social protection from their governments and find themselves without any source of income.

– Housing: Many racialised groups live in overcrowded accommodation and neighbourhoods. This is particularly acute in refugee camps and Roma settlements with extremely limited access to basic services, such as water or sanitation, and without any access to alternative housing. One very concerning situation is in the asylum seeker camp of Moria in Lesbos, Greece, where 18,000 people are living in a facility built for 3,000. The poor living conditions make it nearly impossible for the residents of the camp to follow quarantine measures and avoid the spread of the virus. There are several cases of institutional racism, where authorities are introducing stricter restrictions for Roma and migrant settlements than other neighbourhoods, effectively ‘sealing off’ these neighbourhoods.

– Racial profiling and police brutality: The police have been given more enforcement powers as part of confinement measures. This is disproportionately affecting racial and ethnic minorities, who are already experiencing racial profiling and police brutality. There are several cases of police brutality in the context of Covid-19 and to date two people from racialised groups have died at the hands of the police, in France and in Belgium. In addition, there is evidence of racialised communities being disproportionately stopped and searched by police enforcing confinement measures.

– Racist violence and speech: Since the early months of the spread of COVID-19, people of Asian descent in particular have been victim of racist speech online and offline, being blamed for the COVID virus and its spread in Europe. There have also been several cases of violent racially motivated attacks against Asian people. In addition, there is evidence of racist rhetoric blaming Jews, Muslims, Roma and migrants for the spread of the virus.

– Denial of access to basic services (e.g. water, electricity): Many refugees and Roma live in extremely precarious situations, in camps and settlements without access to water or food. These unacceptable living conditions put people in an even more vulnerable position during a pandemic, since they cannot take the necessary hygienic measures to contain the virus.

“In view of these findings, EU institutions should launch an enquiry into the impact of the pandemic and its consequences on racialised and other marginalised groups in the EU, and develop responses on the basis of this”, said Karen Taylor.

Governments in European countries should also ensure quality healthcare and basic services are provided to all, regardless of resident status, race, nationality, language, and provide shelter for people without homes or in overcrowded refugee camps, for example by using public and private empty buildings. They should put in place financial support measures that care for the needs of all people facing loss of income due to lockdown measures – for example through a basic income for all during the crisis. Governments should also stop the expulsion and detention of undocumented migrants and facilitate their access to health services. Firewall mechanisms should be the main rule at national level.

Notes to editors:
1. The map of cases collected Europe-wide and key findings are available here: https://www.enar-eu.org/COVID-19-impact-on-racialised-communities-interactive-EU-wide-map
2. The two people who died at the hands of the police are: Mohamed Gabsi, 33 years old, who died on 8 April 2020 in France, and Adil C., 19 years old, who died on 10 April 2020 in Belgium.
3. The European Network Against Racism (ENAR aisbl) is the only pan-European network combining racial equality advocacy with building a strong network of anti-racist organisations across Europe. We ensure that laws and policies address racism and reflect the experiences of racialised people. We provide a unique space for organisations to connect and exchange strategies on how to combat racism and support our communities.