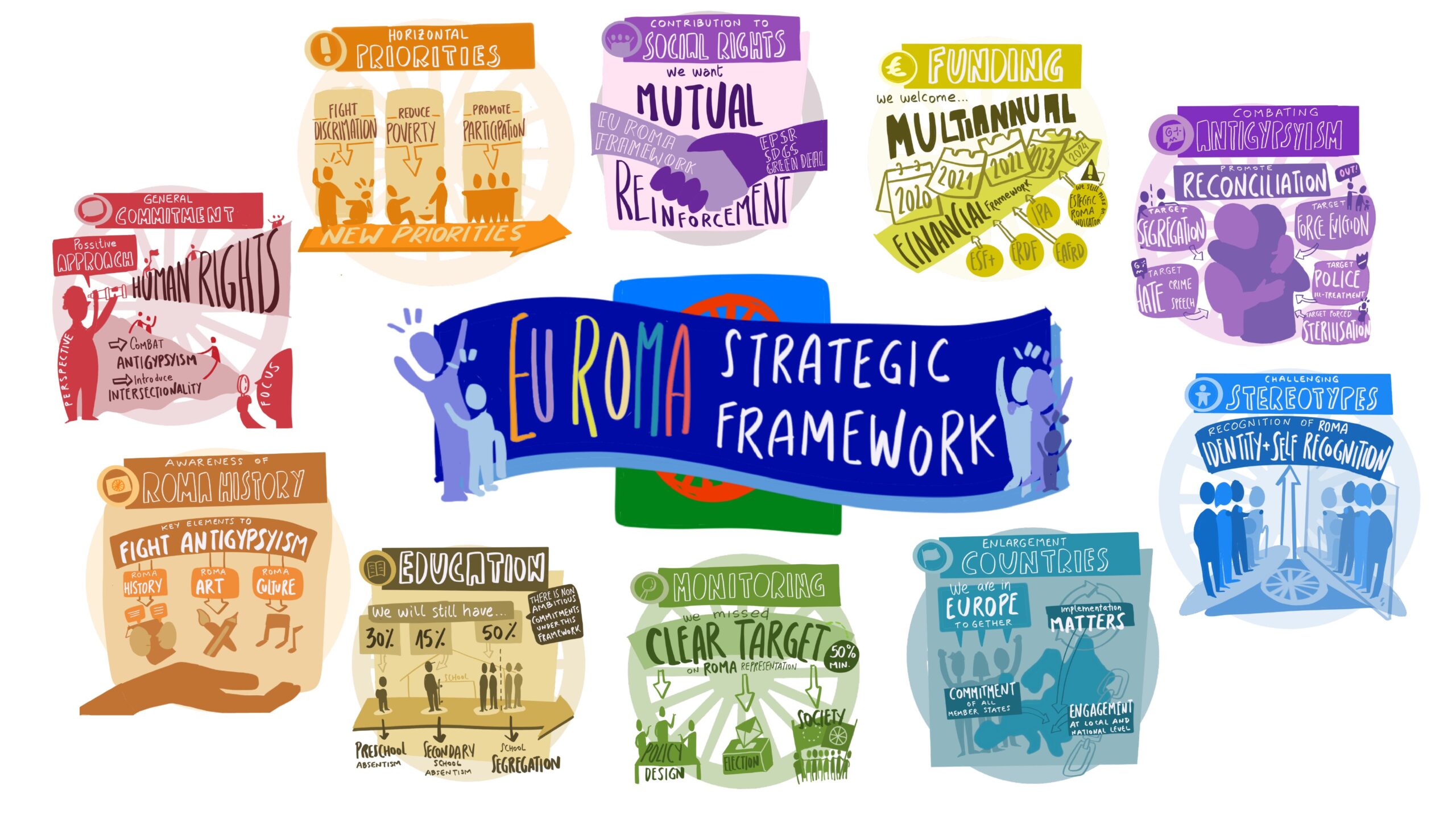 Brussels, 12 October 2020 – Civil society organisations call on the European Commission to ensure that commitments made under the EU Strategic Framework on Roma are held at the highest standards, and demand Member States to adopt an EU Council Recommendation supporting national Roma strategies to bring real justice and equality and ensure meaningful Roma participation at all levels and walks of life.

The EU Roma and pro-Roma Coalition welcomes the Communication for a new EU Strategic Framework for Roma equality, inclusion and participation at a time when real human rights commitments are crucial for the 12+ million Roma in Europe. We believe that the strategic framework announced last week is a step in the right direction. It can, however, only mean something if Member States, Enlargement and Neighbourhood countries put the fight against antigypsyism at the core when implementing national Roma strategies for Roma equality, inclusion and participation.

“As ERGO Network, we welcome the commitment of the European Commission to embed the EU strategic framework in a human rights and equality framework and include Roma participation, the fight against antigypsyism and poverty among the horizontal priorities. Now national governments need to step up. They have to ensure the highest commitments under EU Council recommendations to fight antigypsyism, make school segregation illegal, sanction hate speech, hate crimes and police ill-treatment, prevent forced evictions, invest in infrastructure, clean and safe housing, employment, healthcare and empowerment at the grassroots level”, says director Jamen Gabriela Hrabanova.

“It is crucial that the new EU action plan against racism reinforces the EU Roma framework so that we can effectively address antigypsyism and structural racism experienced by Roma communities in Europe”, said Michael Privot, Director of the European Network Against Racism (ENAR). “National governments should prioritise adopting concrete commitments and measures against racism, for example by prohibiting racial profiling, collecting equality data disaggregated by race and ethnic origin, and increasing racial diversity in institutions.”

“The fight against antigypsyism is the decisive prerequisite for this new Framework in order to achieve an equal participation of Sinti and Roma. We expect that going forward more of our political representatives in Europe act as true human rights promoters and stand up against antigypsyism and any other form of racism”, says Romani Rose, chair of the Central Council of German Sinti and Roma.

“We welcome that the framework emphasizes the crucial role of civil society in designing, implementing, monitoring and evaluating public policies aimed at increasing equality, inclusion and participation, as well as the need for increasing transparency and accountability of these policies. Many important recommendations of the Roma Civil Monitor pilot project have been incorporated into the new framework, for example the supervisory role of national parliaments over governmental actions, engagement of Roma civil society in ESIF monitoring committees, the Roma Civil Monitor continuation and stronger target-setting, data collection and reporting. The actual effect of these recommendations will, however, depend on the Member States’ political will to take steps towards a more inclusive and equal society.” – Roma Civil Monitor pilot project.

“Any efforts aimed at social and economic integration of Roma will remain fruitless unless we address the deeply-rooted discrimination against the Roma. We appreciate that the Commission acknowledges the fight against antigypsyism as one of the new priority areas, however, reacting against discrimination when it happens is not enough. Preventive measures that foster a sense of belonging, contribution and value of Roma as members of our societies need to be central to the new EU Roma Framework. Culture needs to have a more pivotal role as a positive and preventive strategy that effectively alters negative perceptions and builds greater acceptance of the Roma among the majority. At the same time it reinforces a sense of dignity and pride among the Roma”. – European Roma Institute for Arts and Culture.

“We are happy that the Western Balkan countries have taken a step forward and already committed to play an important part in fighting discrimination against Roma throughout Enlargement and Neighborhood countries and dedicate national and EU resources to improve the situation of Roma throughout the accession process.” stated by Adriatik Hasantari, Director of Roma Active Albania.

“Phiren Amenca welcomes the European Commission’s efforts to include Roma youth and achieve equality for them in the areas of employment, education, training and participation. We remind Member States that it is not enough to involve young Roma: Roma youth’s place is at the forefront of these processes. At the end of the day, all these policies concern young Roma the most.” Marietta Herfort, Director of Phiren Amenca International Network.

“The European Public Health Alliance welcomes the European Commission commitment to improve Roma health by reducing the life expectancy gap between Roma and the general population. However, this ambitious objective requires strong efforts in many policy areas going beyond access to healthcare. Therefore, EPHA calls on Member States and Candidate countries to adopt and implement holistic and comprehensive policy measures addressing the social determinants of health within national strategies for Roma equality and inclusion and to set up national indicators and targets enabling progress monitoring of child, women and elderly’s health”. – European Health Alliance

“We applaud the Commission’s attempt to mainstream equality across policies, including on socio-economic inclusion, artificial intelligence, the European Green Deal, digital inclusion and the fight against hate speech. Such alignment must now be built into the budgetary instruments of the EU. A first step would be to link recovery funds with the European Semester country-specific recommendations on Roma. However, we and our Roma partners had hoped for more ambitious targets in the Framework. This is partly due to outdated datasets and evidence with low numbers of incidents. We are calling on the Commission to ensure updated data is being made available to improve the policy work of the EU institutions and civil society. We will keep on pushing for a legally binding EU Framework and call on the Council to follow the same positive path of the European Parliament by endorsing the concept of positive incentives. This is vital to foster a European Union that cares about and protects all its citizens,” says Heather Grabbe, Director of Open Society European Policy Institute.

“The new Framework recognizes the importance to invest into the empowerment and participation especially of Roma youth and Roma women. Voluntary and civic activism is an important contribution to combat stereotypes and antigypsyism in our societies. Therefore, the European Commission and Member States need to strengthen and fund the work of civil society, especially of Roma youth organizations.” Vivian Isberg, TernYpe International Roma Youth Network.

“We very much welcome the EC proposal to include novelties compared to the previous EU Framework, widening the number of sectorial and horizontal key objectives, on which Member States should focus their investments in the next 10 years. Considering that, from our experience, education and employment are essential to ensure equality and close the gap between Roma and the general population, we applaud the effort of including specific minimum objectives and targets in these areas. The allocation of specific EU funds for Roma is also a priority at Fundación Secretariado Gitano, so we hope that the proposed financial instruments will support the endeavours to guarantee the exercise of civil and social rights as a way to achieve full equality under the same conditions as the general population”. Isidro Rodríguez, General Director of FSG.

In times of social and public health uncertainty, it is important that Roma are not left behind and that this coming decade is being used by governments to amend some of the past injustices and daily racial discrimination against Roma. National politics must shift their narratives and measures on Roma in a positive and empowering way, reflective of democratic societies, the rule of law and respect for human rights. Failing to act now will have long term and profound consequences upon generations to come and on society as a whole. 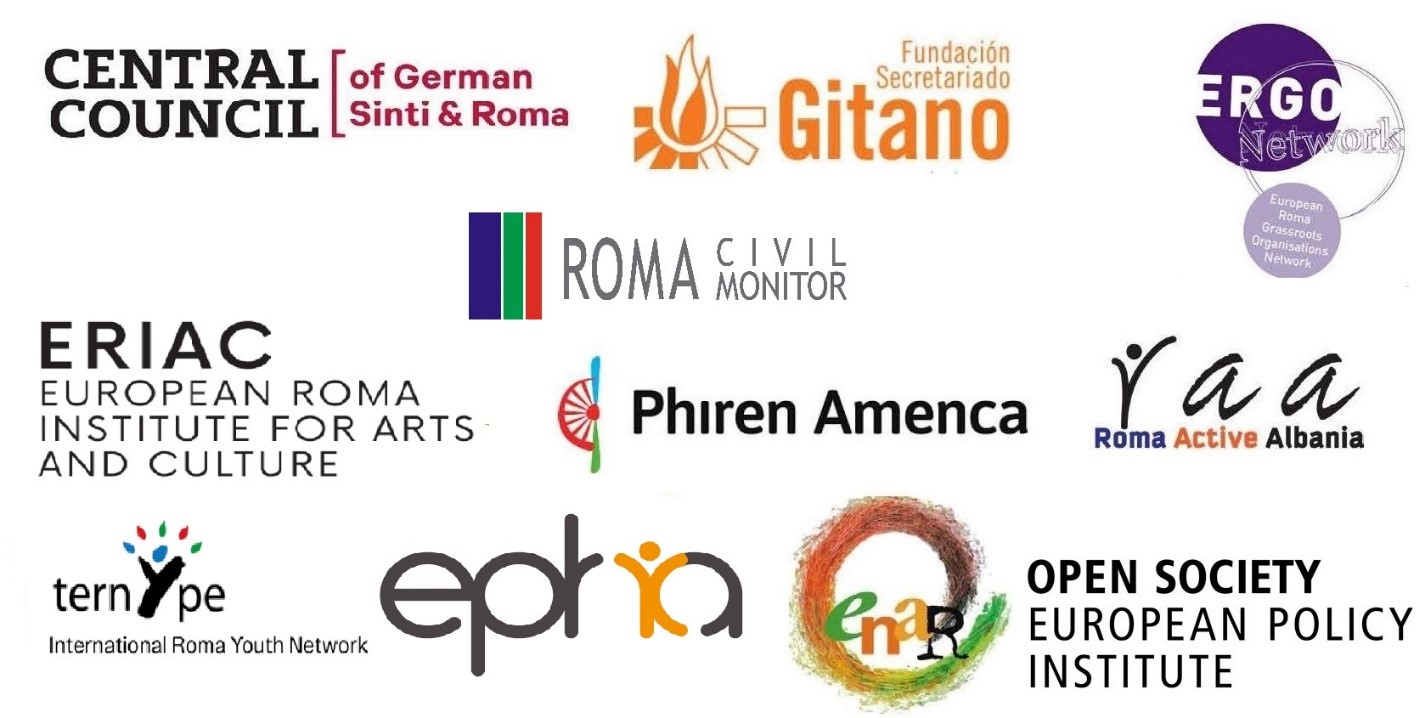 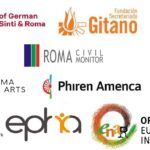