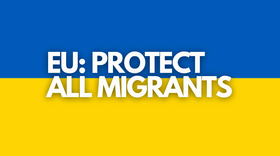 Brussels, 28 February 2022 – ENAR issues a statement over the recent events unfolding at the Ukrainian borders where racialised people are being denied refuge from the conflict.

The Russian attempt to invade the sovereign state of Ukraine has plunged Europe back into its darkest days. Concerned over the loss of life and human rights violations, including racial profiling, the European Network Against Racism expressed solidarity with the people of Ukraine and emphasised the urgent need to find peaceful resolutions. The conflict has unified the global population in a massive outpouring of solidarity and support, prompting world leaders to act fast. Sadly, the conflict, has also been used as a tool to normalise racism in Europe once again.

Over the last few days, multiple sources have documented the difficulties encountered by racialised people, particularly Black and Arab students, other non-EU migrants and refugees, to evacuate the territory. On their way out of the cities, many accounts have shown Black people physically being prevented from boarding trains to the borders. When they arrived at the borders, they were openly denied immediate protection. These are overwhelming examples of racial profiling. This comes in opposition to the official communications from the Polish government stating that all people escaping the conflict would be admitted into the territory.

These actions are leading to the classification of ‘good’ versus ‘bad’ migrants and those considered being under international protection. These double standards are contradictory to European principles of equal treatment and cannot be tolerated. Yet, some Western media journalists have seized this opportunity to trivialise racism to a new degree with claims that Ukrainians demanding international protection were welcome and were not the same as ‘other’, non-European migrants or refugees. Words such as “civilised” versus “third-world or “under-developed” just reinforce the polarisation of the debate. ENAR has well-documented that racialised people are disproportionately impacted in times of crisis, whether the pandemic or the climate crisis. With the continuous use of racist and demonising rhetoric, even in times of war, the message to racialised people in Europe is clear: their lives matter less.

Europe has a responsibility to denounce and fight against systemic racism that relegates a percentage of its population to a second-class status. EU leaders must commit to a firm stand on the EU-anti racism action plan until all lives are treated as equal in the bloc. We ask European leaders to seize this opportunity to send a clear message that racism will not be tolerated and to welcome ALL victims of the conflict under EU immediate protection mechanisms.

For more information or to arrange an interview, contact: Nabil Sanaullah, ENAR Communication and Press OfficerMobile: +32 (0)475 988 585 – Email: nabil@enar-eu.org – Web: www.enar-eu.org Notes to editors: • The European Network Against Racism (ENAR aisbl) stands against racism and discrimination and advocates equality and solidarity for all in Europe. We connect local and national anti-racist NGOs throughout Europe and voice the concerns of ethnic and religious minorities in European and national policy debates.