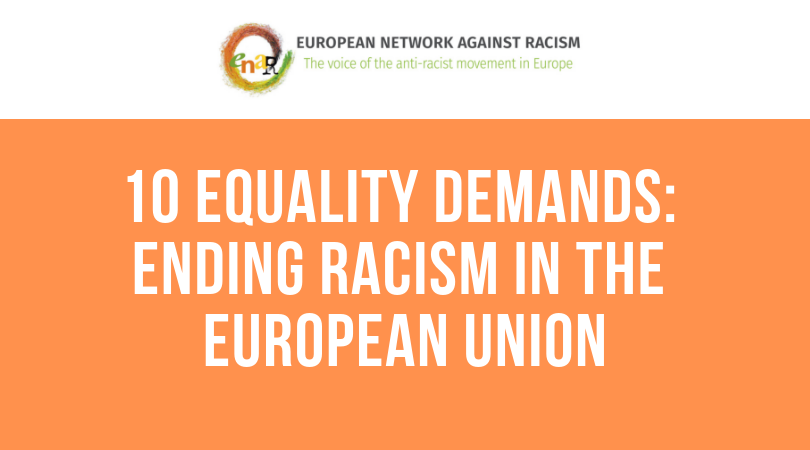 EU Anti-Racism Days: now is the time to join forces ahead of EU elections

Brussels, 18 March 2019 – From 18 to 21 March 2019, activists from across Europe are gathering in Brussels to put anti-racism at the centre of upcoming European elections, just ahead of International Day Against Racism on 21 March. The European Network Against Racism (ENAR) is also launching its 10 EU election demands, calling on candidates to put the European Union on a fairer path by actively promoting equality and social justice for all.

Across Europe, the rise of political parties promoting racism and discrimination and fuelling divisive public sentiments is posing a huge threat to democracy, equality and human rights, and in particular the rights of people of colour, minorities and migrants. The upcoming European Parliament elections in May 2019 risk a shift toward racist and discriminatory political narratives and policies and increased political polarisation. Now is the time to reverse the trend: candidates in the EU elections have the opportunity to make equality and inclusion for all the key message in their campaign.

Activists from all communities affected by racism are therefore joining forces during the EU Anti-Racism Days in a drive to put equality and anti-racism at the centre of these elections.

The European Network Against Racism is also calling on candidates for the European Parliament elections to tackle structural inequality experienced by minorities across Europe by committing to the following 10 actions:
1. Denounce racist violence and all forms of hate
2. Promote positive narratives about minorities in Europe
3. Adopt strong, comprehensive policies to combat structural racism
4. Measure progress towards equality
5. End state discrimination and violence
6. End the discrimination, criminalisation and exclusion of all migrants
7. Promote remembrance and redress for histories of enslavement, colonialism and crimes against humanity
8. Ensure a diverse and representative European politics
9. Support civil society to tackle injustice and inequality
10. Re-establish a strong European Parliament Anti-Racism and Diversity Intergroup

“We need to move towards a shared future where our safety, opportunities and outcomes are no longer affected by race or other identities”, said Michaël Privot, Director of the European Network Against Racism. “In the face of rising racial prejudice and violence across Europe, the EU elections are a moment to unite our efforts for a Europe that is inclusive and eliminates structural inequalities.”

Notes to editors:
1. ENAR’s EU Election Demands are available here: https://www.enar-eu.org/EUelectionsdemands
2. The EU Anti-Racism Days are a joint initiative of the European Network Against Racism (ENAR), Each One Teach One (EOTO), the European Parliament Anti-Racism and Diversity Intergroup (ARDI), and the European Network for People of African Descent (ENPAD).
3. The programme includes the following events:
– A lecture & discussion on “Anti-racism/discrimination strategies ahead of the EU elections”, with David Lammy, Tracy Bibo-Tansia & Omar Ba, on 20 March at 20.00 at BOZAR Brussels
– A conference taking stock of the European Parliament’s anti-racism work: “Combatting racism/discrimination: Evaluating 2014-2019 and recommendations for 2019-2024”, on 20 March at 13.00 in the European Parliament – Register for this event
4. In parallel, the EU Roma Week is taking place and includes a series of events which will provide recommendations on combatting antigypsyism and structural discrimination.