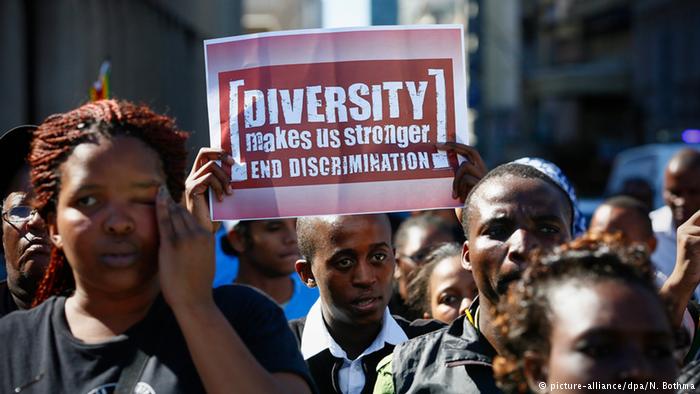 ENAR presents situation of Afrophobia in Europe in the European Parliament

Thank you M. Chair,
Dear Members of the European Parliament,
Ladies and gentlemen,

As a Board member of the European Network Against Racism (ENAR), I welcome the decision of the LIBE committee to hold a specific agenda point on the highly worrying increase in racism towards people of African descent in Europe. I thank you for inviting us to contribute to this topic.

This is the first official discussion specifically on Afrophobia in LIBE, following several events organised in this house by ENAR and ARDI, the Anti-Racism and Diversity Intergroup. 30 minutes are not enough to have a meaningful discussion and plan steps for action. I can only encourage you to continue this effort, and organise a longer hearing on this topic, to inform the production of a LIBE driven resolution to call for action by member States and the European Commission.

First, a few words about ENAR. ENAR is the only pan-European network of NGOs working to combat racism and related discriminations that combines advocacy and cross-communities action. ENAR and its members have a strong expertise on Afrophobia, as well as other forms of racism. We’ve notably produced a Book on people of African descent and Black Europeans, as well as a comparative report on Afrophobia in the EU, to close the knowledge gap. We wanted to counter excuses for inaction due to the lack of data. You may find both publications in the room, and on ENAR’s website.

Afrophobia is a specific form of racism that refers to any act of violence or discrimination, fuelled by historical abuses and negative stereotyping, and leading to the exclusion and dehumanisation of people of African descent. Afrophobia refers to anti-Black racism and has nothing to do with a pathological “phobia”. Likewise, homophobia or Islamophobia are not “irrational fears” but forms of discrimination. This correlates to historically repressive structures of colonialism and the transatlantic slave trade, as recognised by a recent blog from the Council of Europe Commissioner for Human Rights.

People of African descent and Black Europeans are victims of particularly violent racist crime. The first EU-MIDIS survey by the EU Fundamental Rights Agency revealed that 33% of Sub-Saharan Africans in Europe have been victims of at least one racially motivated crime in the 12 months preceding the interviews. For instance, Afro-Swedes are the Swedish minority which is most exposed to hate crimes according to statistics, indicating a 24% increase since 2008. In 2015, one man stabbed three persons to death in what was qualified as a racist attack in Trollhättan school in Sweden.

Discriminatory policing and ethnic profiling are long standing issues. In Paris, research by the Open Society Justice Initiative showed that people perceived as ‘Black’ were overall six times more likely to be stopped by police than White people. In the UK, Black people were six times more likely to be stopped and searched by the police than White people according to latest police data. In Germany, the repeated denial of the fact that Black people are being racially profiled leads to the failure to effectively investigate and prosecute perpetrators of racial profiling.

In numerous European countries where there is data, we see that Black people are overrepresented in prisons. In addition, 2017 has seen numerous examples of violence against black people at the hands of the police, including the death of Rashan Charles in July in the UK, and the violent abusive arrest of Theo Luhaka in France in February. In Germany, the case of Oury Jallow, who died in a police cell in 2005 will finally be reopened for investigation.

We know that people of African descent are particularly underrepresented in seats of power. For the few Black politicians, racism and discrimination remains an issue fought on a daily basis, as the racist onslaught of MEP Cécile Kyenge shows.

Across all the indicators, education, health, criminal justice, employment Black people are often the most discriminated against. Employment for instance is one area where there are significant legislative protections already in place at EU level but the reality is that discrimination still takes place at alarming rates.

Stereotypes about Africa and people of African descent that date back to colonialism are still predominant in almost every single European country. In The Netherlands for instance, Blackfacing –the use of black make up to represent a stereotyped characteristic of Black people – is still widely used in the Saint Nicholas and black Pete celebration.

Changes in migration and asylum policies and practices impact both people of African descent who are recent migrants as well as Black Europeans with a migration background. Public and political discourse that attempts to differentiate between ‘legitimate asylum claims’ and ’economic migrants’ tends to demonise entire groups, in particular African migrants. Disturbing reports of Sub-Saharans dying at sea trying to reach Europe have been frequent.

EU Member States have the obligation, under EU and international law, to ensure Black people enjoy the rights to equal treatment and non-discrimination. In 2015, the UN General Assembly also proclaimed the UN Decade for people of African descent to work in the spirit of recognition, justice and development. Despite these obligations, racial discrimination and racist crime are widespread. It is high time that this situation receives proper attention.

There are many more issues that should be addressed, and we hope there will be in future dedicated hearing and debates around a resolution from this house.
ENAR calls in particular for four next steps:

First, the LIBE committee should adopt a Resolution on combating Afrophobia in the European Union.

Second, the European institutions should mark the UN International Decade for People of African Descent and participate in the upcoming regional conference in Geneva in November.

Third, the European Commission should appoint a coordinator with special authority to combat Afrophobia, just as for Antisemitism and Islamophobia.

Fourth, the European Commission should adopt an EU framework encouraging Member States to adopt Action Plans and collect equality data based on self-identification.

To conclude, I would like to insist on the fact that it is important to tackle all forms of racism jointly – together with Antisemitism, Islamophobia and Antigypsyism – so as to show all forms of racism and hatred are of concern to all, and are equally important to address. The fundamental difference is that, unlike for people of African descent, the historical realities of many of the other groups are recognised and politically acknowledged.

MEPs and Commissioners have been quick to denounce alt-right protest in the US, and rightly so. But we wish they would put the same level of passion to denounce racism in Europe. Because in Europe too there have been instances of Black people being killed in the street, raped by police, verbally and physically abused. There might not be such a history of race-related tensions in Europe as in the US but the current situation is as concerning. Except that in Europe denial of racism is much higher.

Thank you for your attention.