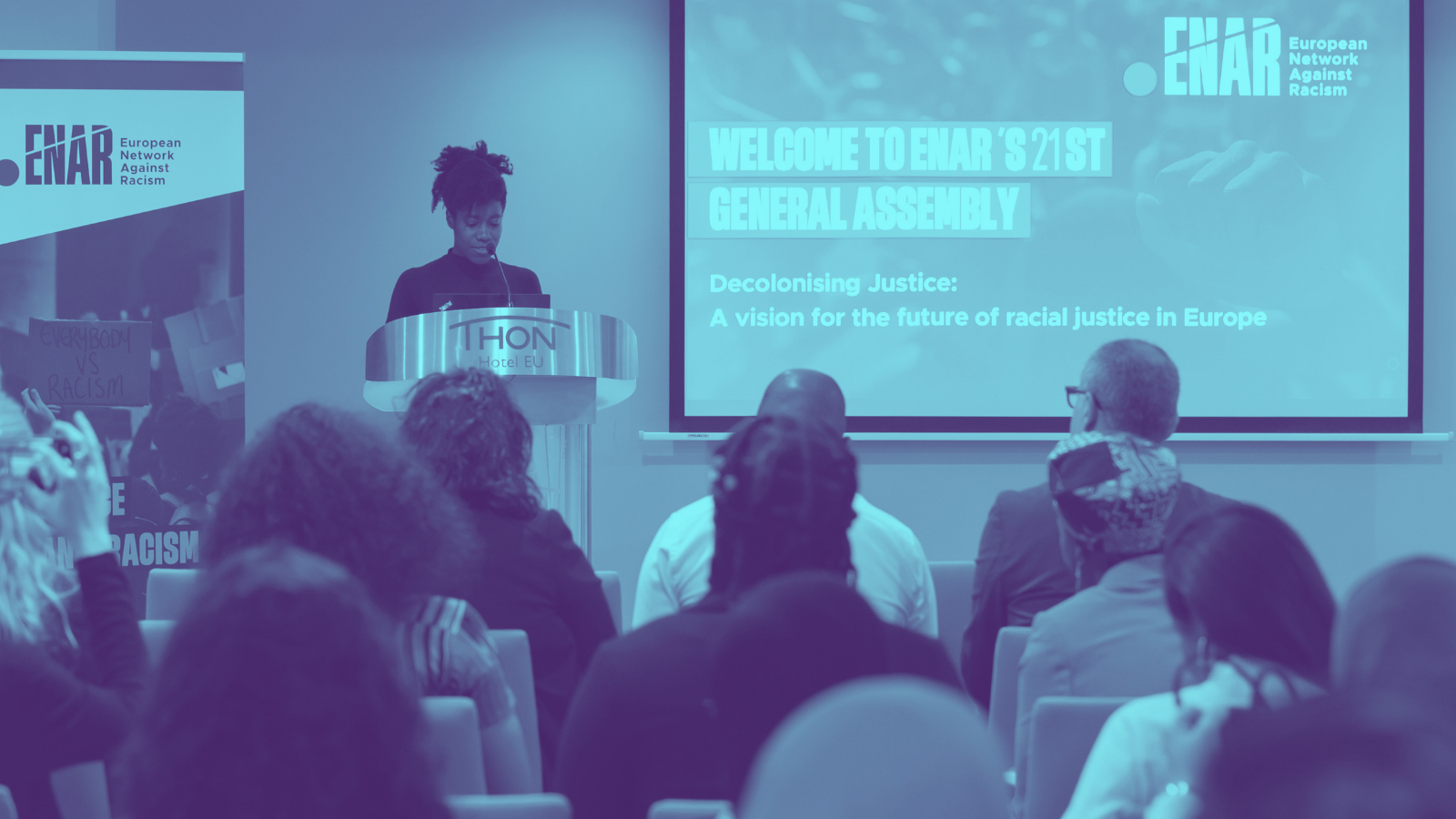 GA 2022 – Decolonising Justice: A vision for the future of racial justice in Europe

ENAR held its 21st General Assembly in Brussels between May 19th and May 21st. Welcoming over 80 Network representatives from across Europe, the event centered around the theme of Decolonising Justice.

Members attended a meeting held at the European Commission on the EU Action Plan Against Racism and the implementation of the National Action Plans Against Racism (NAPAR). The panel, also attended by EU Anti-Racism Coordinator Michaela Moua, aimed for ENAR members to learn from practices, difficulties, challenges in building a NAPAR coalition and advocacy including: Equality Data collection, recognition of structural racism, and intersectionality. Concerns over the lack of appointment of a new EU Coordinator against Islamophobia were also raised during the session.

“Structural racism, intersectionality, equality data are building blocks that wouldn’t exist without the work of all of you as CSOs and ENAR as a European network”

The Network also extended Karen Taylor, Lead of Political Communition at Each One Teach One, as its board chair. Taylor will be joined by Ghislain Vedeux, President at Conseil Représentatif des Associations Noires, whose mandate extension as vice-chair was also confirmed. Taylor and Vedeux have served on the ENAR board since 2019.

Following an internal recruitment within the ENAR Staff, Ojeaku Nwabuzo was appointed as Co-Director to work alongside current ENAR Director Kim Smouter as part of the secretariat’s Senior Management Team. Ojeaku has 6 years of experience within the organisation and has completed a number of research reports as a Senior Research Officer.

ENAR welcomed two impressive guests to deliver Keynote speeches: Saraya Gomis, Secretary of State for Equality and Non-Discrimination for the Berlin Lander, and Domenica Guidei Biidu, member of the European Commission against Racism and Intolerance (ECRI) in respect of the Netherlands. The speakers discussed the frameworks, advancements, and challenges within which they advanced their work in addressing racism and provided the Network opportunities to ask questions.

“We are still at a plantation!”

Our panel on Decolonising Justice welcomed Liliane Umubyeyi (co-founder and co-director of the African Futures Action Lab (AfaLab)), Philsan Osman (writer, activist and community builder and studies African Languages and Cultures at Ghent University), Mitali Nagrecha (founder and coordinator of Justice Collective), and Myriam Douo (campaigner at Friends of the Earth Europe and Climate Advisor for Equinox, initiative for racial justice). The panel explored the importance of justice within anti-racist organising and the unrealistic belief that justice is blind due to structural racism. The discussions also explored the concepts of transformative approaches to justice and moving beyond punitive mechanisms, and the lingering issues around border control and Frontex.

Following a Q&A session, participants engaged in breakout discussions to brainstorm some key recommendations, messages and activities that could be adopted based on the discussion before adjourning for the day.

Kim Smouter, ENAR Director, delivered a presentation to members on the secretariat’s current work priorities for 2022 and the ambitions for 2023 with a board mandated approval to carry out next year’s objectives. The presentation also included the aspects of governance in addition to the completion of ENAR’s rebranding process undertaken in 2021. During the Q&A, we discussed ways to increase member engagement by exploring further communication channels, maintaining migration policy as a priority within the secretariat’s work, and the ways in which ENAR would operate under the co-Directorship of Kim Smouter and Ojeaku Nwabuzo.

In the final part of the event, staff members led 6 stands focused on Communications, Administration and Finance, Equal@Work, Advocacy, Network Capacity Building, and Shrinking Civic Space. Members were invited to freely exchange with the staff, ask questions, and explore ways to strengthen the movement. Finally, a series of engaging workshops were organised by the staff on the topics of NAPAR with a focus on Artificial Intelligence, Climate Justice, and UN Coalition. Members had the opportunity to sign up for their preferred workshops and discover more about the work being done by the secretariat. As members made their way back to the plenary, Karen Taylor delivered final words drawing the event to a close.