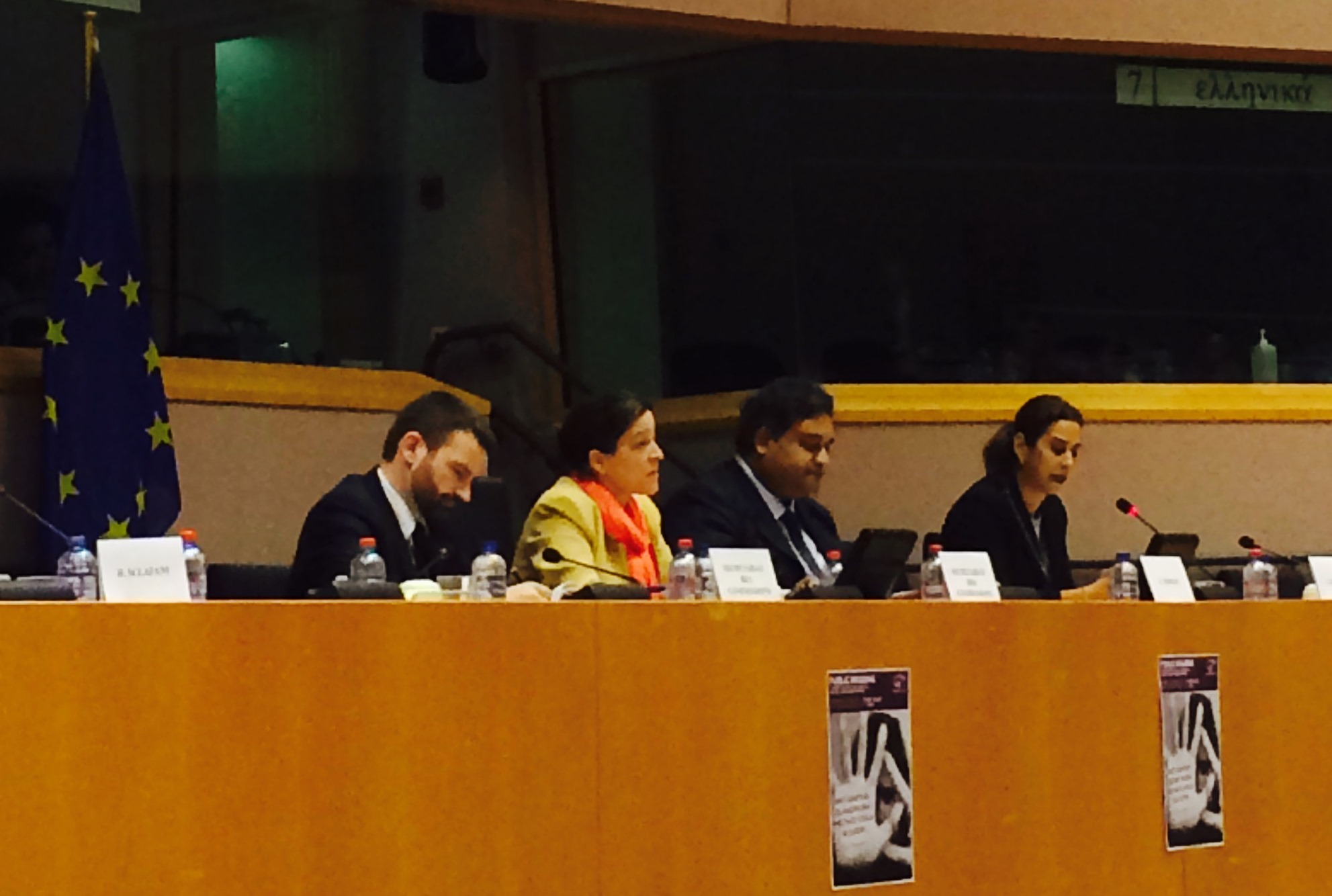 As the chair of the European Network Against Racism (ENAR), I welcome the decision of the LIBE committee to hold a hearing dedicated to the highly worrying increase in specific forms of hatred in Europe. I thank you for inviting us to contribute to this topic.

I particularly welcome the decision, following the debate in Plenary session on the same topic, to take the necessary time to produce a relevant and complete LIBE driven resolution to call for action by member States and the European Commission.

ENAR is the only pan-European network of NGOs working to combat racism and related discriminations that combines advocacy and cross-communities action. ENAR and its members have a strong expertise on both anti-Semitism and islamophobia.
Two member organisations of ENAR, CEJI (A Jewish contribution to an inclusive Europe) and FEMYSO (Forum of European Muslim Youth and Students organisations) are on the expert panels today and we are pleased that such a diversity of organisations is present within our network, in a common effort to combat hatred.

Anti-Semitism is deeply rooted in Europe, as its resurgence after the Holocaust proved. It is with great concern that we have seen a general increase over the last years. The Community Security Trust (CST) in the UK reported an increase of 60% of violence committed against Jews in the EU between 2008 and 2014. According to the FRA survey, Jews in Europe are increasingly afraid of being verbally harassed (46%) or physically attacked (33%). In Belgium, the equality body reports that complaints received for anti-Semitic incidents have increased from 83 in 2013 to 130 in 2014 (+56%).

In France, a 2013 report from the French National Human Rights Institution reveals that anti-Semitism is not always understood properly, is often seen either as a phenomenon of the past or as isolated acts from either violent extremists or neo-Nazi groups, but is rarely seen as a structural phenomenon.

The extent of anti-Semitism in Hungary came to the forefront when, in November 2012 a Jobbik MP called in the Hungarian Parliament for a list of Jewish civil servants, after which there was no immediate outcry from other government officials. Similarly in Greece, extremely anti-Semitic rhetoric and literature have been associated with elected members of the Golden Dawn party. understanding the complexity in which anti-Semitism manifests itself is key to combatting it. For instance, Hungary and Greece feature high levels of indigenous anti-Semitism and neo-Nazi activity, but lower levels of physical violence compared to countries such as France and Belgium in which anti-Semitism is much less socially acceptable, but violence is more common.

Bullying and prejudice at school are frequent for Jewish children. In Hungary, there are increasing reports of parents moving their child to Jewish schools following incidents in mainstream education. Jewish children also experience discrimination or segregation in education.

There has also been a worrying increase of Islamophobic incidents over the last years.

In France, the number of attacks against Muslims was multiplied by 6 following the Paris attacks compared to the same period in 2014, according to the Collective Against Islamophobia in France (CCIF). In Sweden, attacks on mosques have increased. In Italy, official Islamophobic reactions including by the Venetto educational authorities, are frequent.

Muslim women are particularly targeted by violence. Because public debates focus on Muslim women and the wearing of the headscarf, veiled women are reduced to their religious signs in the view of many and are thus becoming privileged targets of Islamophobia.

ENAR shadow reports and FRA reports also highlighted that the heightened security context since the events of 11 September 2001 has contributed to experiences of direct and indirect discrimination by ethnic and religious minorities in Europe. In particular Muslim communities, and those perceived as belonging to Muslim communities, have been amongst the most vulnerable, at times victims of backlash from wider society after terrorist attacks and then victims of policy responses to these attacks.

Muslim people tend to experience the most severe labour market discrimination, as evidenced ENAR Shadow Reports. Muslims, and in particular Muslim women, also face discrimination due to restrictions to the right of wearing religious symbols in national laws and practices, for example in France, Belgium, the Netherlands and Spain.

Anti-Semitism and Islamophobia are the products of different histories and ideologies; and they cover diverse realities and types of manifestations which are specific to each.

However, anti-Semitism and Islamophobia are both specific forms of discrimination and racism in which attitudes, behaviours, institutional patterns and policies reject, exclude, vilify, or deny equal treatment to people, based on their real or perceived Jewish or Muslim background. They have the same concrete implications on the physical, psychological or financial situation of individuals.

Despite the EU and national equality legislations, the specific direct and structural discrimination faced by Jews and Muslims imply that existing legal instruments and policy measures are not enough to ensure equality of outcome.

The response to anti-Semitism and Muslim hatred should therefore deal with these common and separate factors. ENAR calls the LIBE committee to include in its resolution (or resolutions) on anti-Semitism and Islamophobia that the European Commission should ask Member States to adopt specific national strategies with concrete policy goals, on the model of the National Roma Integration Strategies, to address anti-Semitism on the one hand, and islamophobia on the other. Policy goals should be specific to each national context and address each fields of life, in particular employment and education.

History has shown time again that there is a connection between hate speech and hate crime. hate speech, which is the topic of one of the panel today, creates a climate in which perpatrators of racist violence feel that the society condone their behaviour so it is imperative that hate speech should be addressed. In some cases, and in the respect of international human rights law, they should even result in criminal proceedings.

We also hope that racist, anti-Semitic and islamophobic violence feature in the European commission bilateral talks with member States on the enforcement of the EU’s Framework Decision on combating racism and xenophobia.

There are many more issues that should be addressed, and we hope there will be in the context of the panel discussions. In particular in terms of larger context, we should keep in mind that to prevent discrimination and violence, more long-term social investment in education, housing, employment and health policies , as well as in intercultural dialogue and social cohesion programmes, are crucial to stop the massive disenfranchisement of sizeable parts of the population, which nurtures violent extremism.

To conclude, I would like to insist on the fact that it is important to tackle these forms of racism and hatred – as well as anti-Gypsyism and Afrophobia – jointly, so as to show all forms of racism and hatred are of concern to all, and are equally important to address. Now is time for cooperation and alliance building to keep in mind the greater cause, beyond attempts from some to pit communities against one another. In the context of the creation of a new group in this house which gathers those who would like to promote racist, xenophobic, islamophobic or anti-Semitic ideas, policies and practices, this is a matter of urgency.