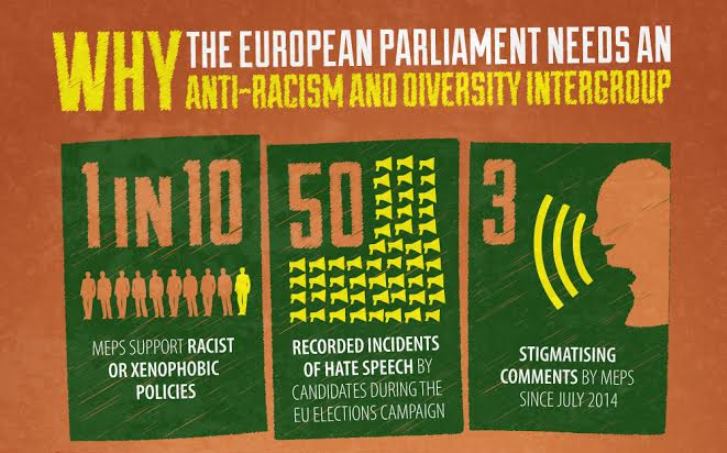 Campaigning for a strong Anti-Racism Intergroup in the European Parliament

ENAR and 100 European and national civil society organisations are calling on MEPs and political groups to establish a strong intergroup on anti-racism in the European Parliament.

The progression of far-right parties or parties propagating xenophobic and racist ideas – with 80 MEPs from these parties – threatens the core European values of human rights and equality.

The intergroup would provide an informal platform for MEPs of different political groups and different committees to step up efforts in order to:
(1) mainstream racial equality and anti-racism in policy and legislative work of the EU bodies and monitor EU equality and diversity initiatives;
(2) monitor the situation of groups at greater risk of racial discrimination and propose remedies and corrective measures to be taken by Member States; and
(3) consult and liaise with civil society organisations and representatives of ethnic, racial and religious minorities to enhance their participation in decision-making processes.

– Read the full joint statement: Strengthening the European Parliament’s capacity to act against racism: MEPs must coordinate their efforts

– See our Infographic and share it on social media!

– Read the blog ‘Stronger Together: The Case for a European Parliament Intergroup against Racism’ on Open Society Foundations’ Voices