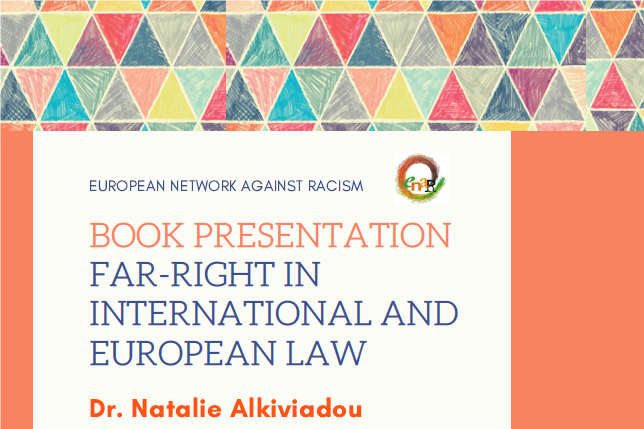 This event will bring the author of the book, Dr. Natalie Alkiviadou, together with those interested in recent developments in the far right movement and revisit how anti-racism can challenge the far-right through and within the scope of EU law. 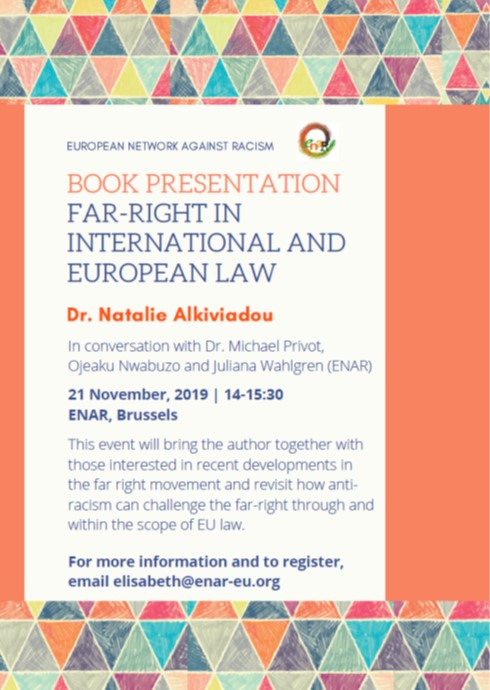 Natalie Alkiviadou is a lecturer in EU Law and Human Rights. She holds degrees from Warwick University (LLB) and Utrecht University (LLM), and a PhD from the Vrije Universiteit Amsterdam. Natalie is the founding member and Director of Aequitas (ENAR member) and researcher on Cyprus for several ENAR Shadow Reports.

Since the Second World War, the international community has sought to prevent the repetition of destructive far-right forces by establishing institutions such as the United Nations and by adopting documents such as the Universal Declaration of Human Rights. Jurisprudence and conventions directly prohibit far-right speech and expression.

Nevertheless, recently, violent far-right entities, such as Golden Dawn of Greece, have received unprecedented electoral support; xenophobic parties have done spectacularly well in elections; and countries such as Hungary and Poland are being led by right-wing populists who are bringing constitutional upheaval and violating basic elements of doctrines such as the rule of law.

In light of this current reality, this book critically assesses the international and European tools available for States to regulate the far-right. It conducts the analysis through a militant democracy lens. This doctrine has been considered in several arenas as a concept more generally, however, it has not yet been applied within a legal assessment of challenging the far-right as a single entity.

The book looks at state obligations and assesses how freedom of opinion and expression, freedom of association and freedom of assembly are provided for in international and European law, and explores what limitation grounds exist which are directly relevant to the regulation of the far-right.

The issue of the far-right is a pressing one on the agenda of politicians, academics, civil society and other groups in Europe and beyond. As such, this discussion will appeal to those with an interest in anti-racism, International, European or Human Rights Law and Political Science.

For more information and to register, email elisabeth@enar-eu.org 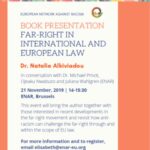