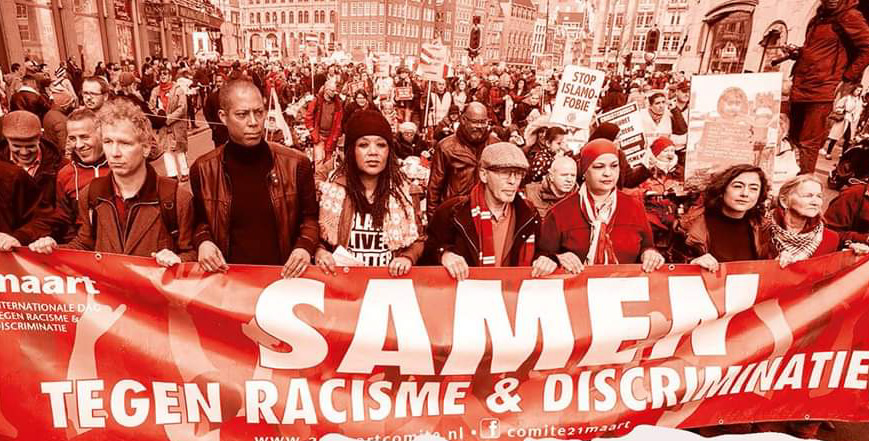 On 21 March, it is International Day Against Racism. With the Covid-19 pandemic, demonstrations have been cancelled, but organisations and activists are continuing to organise for justice through online actions and solidarity initiatives. Have a look at some of the actions happening in different countries.

This online demonstration is organised by a platform of anti-racism and other organisations in Belgium. They are encouraging everyone to sing the civil rights song ‘Ain’t Gonna Let Nobody Turn Me Around’ together in an online version.

In light of the current situation caused by the outbreak of COVID-19, the Forum of European Muslim Youth and Student Organisations (FEMYSO) has launched a Europe-wide campaign, “Outbreak of Generosity”. The campaign aims to inspire young people across Europe to provide support to vulnerable people and each other in a completely safe manner.

To enable this, they have created an interactive toolkit, which is now available in 13 languages, with more languages to be added.

“The demonization of the right to asylum and the refugee flows and their interconnection with terrorism, structural racism and discrimination, hate speech and hate crime against migrant and refugee communities, against minorities and diversity, the demonization of NGOs and human rights defenders, all take on terrifying dimensions and they are fomented by the government narrative and policies, sections of the media and social media, which often uncontrollably spread fake news, thereby threatening people’s democratic achievements and decimating solidarity with vulnerable communities and groups, which experience racism and exclusion and inability to enjoy their basic and fundamental rights on a daily basis. The coronavirus pandemic further adds to the above and is used as a tool for legitimising policies, narratives and rhetoric against those most vulnerable.”

This organisations is participating in the Global Action Day on 21 March with two online live streaming events, in Odense and Aarhus.

Online ‘Walk against Discrimination’ by Greek Forum for Migrants & others

To replace the Walk Against Discrimination, the Greek Forum of Migrants and other organisations are calling on individual and organisations to post their message against discrimination and racism on the Facebook event page of the Walk, from 18 to 21 March 2020.

Anti-Racism Month by the Irish Network Against Racism (INAR)

To mark the International Day for the Elimination of Racial Discrimination, INAR is launching the newest iReport.ie Report of Racism in Ireland 2019 on 19 March.

Instagram campaign ‘Hand in hand against racism in Torino’

The fight against racism will go digital on 21 March. There will be a livestream with an anti-racist programme.

Stand Up To Racism world against racism online rally

Join a #WorldAgainstRacism online rally which will hear from key international speakers involved in tackling racism and the far-right. There will be online anti-racist video messages from MPs, trade unionists, faith groups and campaigners on the day.

Every year, UNITED coordinates a week-long Europe-wide campaign around 21 March to protest against all forms of racism and discrimination, and celebrate the diversity that enriches European societies. For the 60th anniversary of this day, European Action Week Against Racism 2020 will take place from 16th to 29th March, around the theme of “Solidarity”.