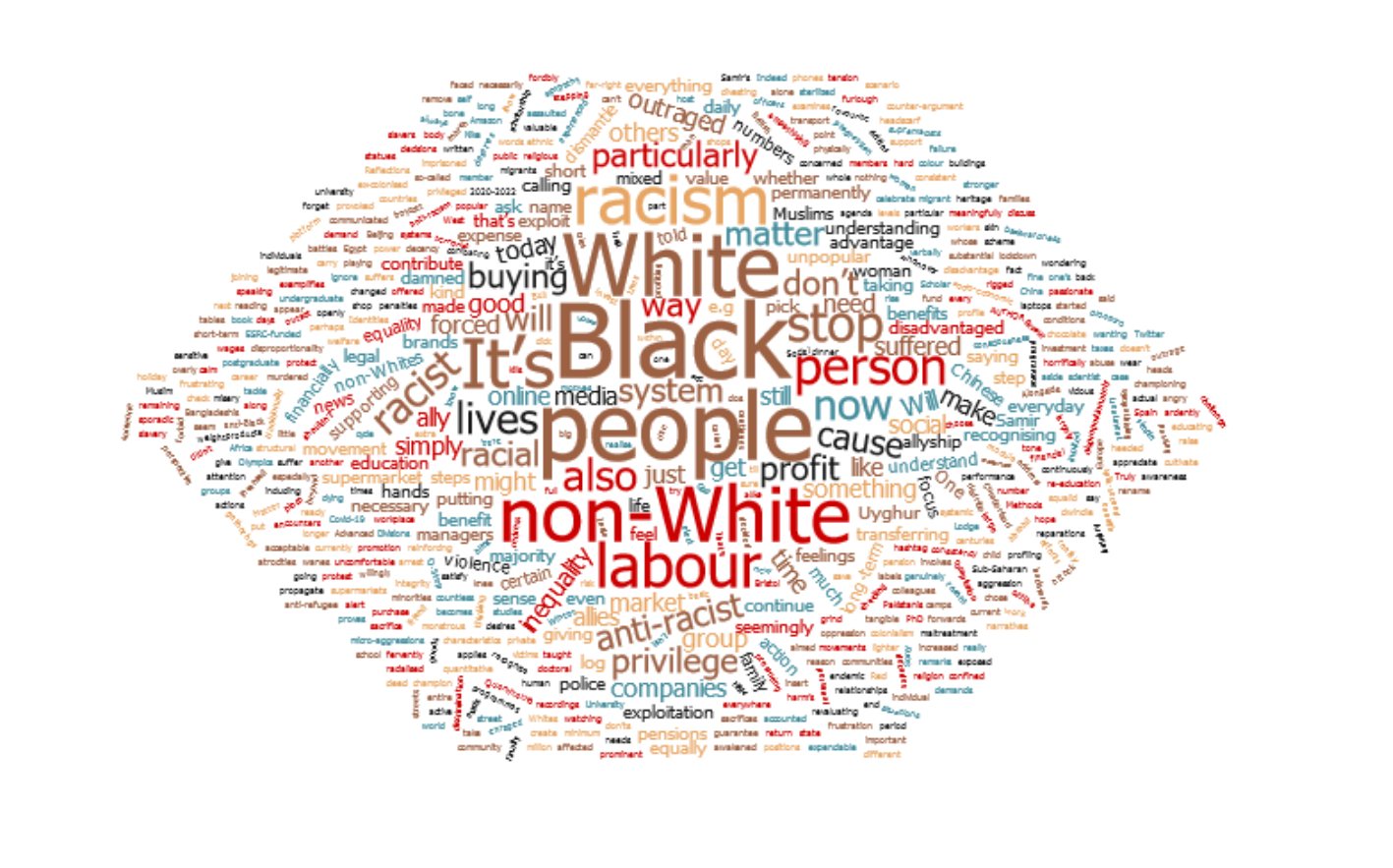 A prominent reason, I have been told, as to why current demands for ‘racial’ equality are different is because now White people are joining in in large numbers too. In short, Black people now have White allies. As a non-White person I have mixed feelings about this, going backwards and forwards between a sense of hope and frustration. This short piece was written at the outset of the most recent Black Lives Matter movement to try and make sense of this tension.

While I appreciate that allyship is a necessary step, it is the very fact that it is so that is frustrating because it exemplifies the actual White privilege that the movement aims to dismantle. Black and other non-White people have been speaking about aggression on the street, discrimination in the legal system and the labour market, ‘racial’ profiling at the hands of the police, and micro-aggressions in everyday encounters for decades. That these cries now carry more weight and appear to be finally heeded because they are being communicated by a White voice is the very essence of privilege.

It might seem from what I am saying that White people are ‘damned if they do, and damned if they don’t’. That isn’t necessarily the case. One simple way to contribute meaningfully to this cause is to be consistent and be in it for the long-term. One way to check your motives is to ask yourself: how long have you been championing the anti-racist cause? If you just started now, that’s fine, but ask yourself if you will still support the cause for ‘racial’ equality so ardently when the numbers dwindle and the media attention wanes. Will you still champion the anti-racist cause so fervently when Black and ex-colonised people demand reparations that you might have to contribute to financially through increased taxes? When lockdown and the furlough scheme end, will you sacrifice your wages and days off to march and protest?

To all of us, White and non-White alike: are we equally outraged by how seemingly expendable the lives of Black people abroad are? Will we stop buying certain brands of chocolate, phones and laptops that exploit Black child labour in Sub-Saharan Africa? Or do Black lives only matter in Europe and the US? What about the lives of Uyghur Muslims, one million of whom are currently imprisoned in so-called ‘re-education’ camps and whose women are being forcibly sterilized by the Chinese state? Are we ready to boycott the Beijing Winter Olympics 2022 and stop buying Chinese products including our favourite brands (Amazon, Adidas, H&M, Nike, Sony to name a few) that benefit from forced Uyghur labour to show that their lives matter too, or is that ‘just too hard because everything is made in China’? Are we – particularly non-Whites – equally incensed about the maltreatment and everyday abuse suffered by Black people in non-White majority countries such as Egypt and India, to name but a few? Are we enraged about the squalid conditions of migrant workers in Spain who pick our fruit that we will stop buying from supermarkets that profit from this exploitation? Will we no longer purchase goods from companies (e.g., Red Bull) that give a platform to White supremacists and propagate anti-refugee narratives? If we are really outraged about the atrocities of slavery, it is not enough to discuss how to remove statues of slavers and rename buildings, we need to also take active steps to stop supporting companies that exploit and profit from forced labour today.

It’s also important for new White allies to put their actions in perspective, and to understand the reality of the challenge faced by non-White groups and individuals. I am saying this to raise awareness and cultivate understanding, not to attack: your outrage on Twitter because someone said something racist is our 24/7. It is not confined to the online world, and we don’t get to ‘log off’ and forget about it till the next time we log back on. Arguing with a social media racist is not our good deed for the day that we get to ‘feel good about’. The racism we are exposed to is online and offline, it’s on our streets, at work, at school and university, in the legal system, and for those with mixed families it is at the dinner tables during family gatherings over the holiday period. We are always alert to the ‘acceptable’ racist remarks people say in passing (like that time I had to understand why it was legitimate for a White man, ‘who didn’t have a racist bone in his body’, to feel ‘provoked’ by a woman simply because she chose to wear a headscarf), and have to make split-second decisions on which battles to pick while also remaining calm and understanding, because God forbid we should be ‘too passionate’ about not wanting to be insulted because of our skin colour, heritage or religion. Being an ‘angry Black woman’ or a ‘overly sensitive Muslim’ proves our ‘backwardness’. We then have the pleasure of playing the scenario over in our heads and wondering whether we could have made a stronger counter-argument. Because our ‘failure’ in these situations affects our entire racialised community, we don’t have the advantage of being an individual. That’s White privilege.

Truly being an ally is not sporadic short-term action. It doesn’t stop at educating one’s self about racism, reading a book, recognising that racism exists, sympathising with anti-racist movements, being kind to people because (as I have been told a few times in an ‘empathising’ tone) ‘once you get to know [insert any non-White group you like] you realise they are just like us’, being outraged at the news whenever another far-right terrorist kills a group of migrants, calling out racist diatribe for what it is on social media, being concerned with the welfare and feelings of victims of racism, or having your consciousness awakened after watching recordings of countless Black people being murdered by police officers. That is not being an ally, that’s the bare minimum of human decency.

In ‘the West’, genuinely being an ally involves permanently giving up so much of what is valuable to you as a White person (whether you recognise it or not) by taking tangible steps, every day, to stop profiting from your privilege and transferring the benefits of this advantage to those who traditionally it has been – and largely continues to be – at the expense of. We need to address racism as a whole, not simply focus on the part that is popular now because the White majority have decided racism is on the agenda today. Being anti-racist is a way of life, it’s not a hashtag nor is it a performance in taking the knee. It is a daily grind of dos and don’ts.

• It’s daily sacrifices no matter how big aimed at combating racism and violence against Black and other non-White people everywhere. It’s extra time at the supermarket, in the shops, online, checking the labels of everything we are thinking of buying to make sure we are not reinforcing systemic oppression or financially supporting the exploitation of others to satisfy our desires and needs.
• It’s divesting from companies that profit from forced labour and pressuring pension fund managers to do the same. If we can’t guarantee our private pensions or the pensions offered at our workplace can do this, we shouldn’t elect to invest in them.
• It’s continuously calling out family members, colleagues, managers and those in positions of power especially when it is uncomfortable and unpopular to do so. This applies to non-White minorities who are not Black and who need to more openly tackle the anti-Black racism that is endemic within some of our communities.
• For non-Whites who are not Black it is also recognising that while we have suffered horrifically during colonialism at the hands of Whites, and continue to suffer racism and inequality today, Black people have suffered a particularly vicious and monstrous treatment which deserves a particular focus.
• It’s revaluating the relationships we have with people, no matter ‘how good a friend they are’ or ‘how much they might benefit our career progression’, who choose to ignore the misery of others and continue to willingly profit from a system rigged in their favour at the expense of others simply for having a lighter complexion.
• It’s putting in substantial investment to create long-term undergraduate and postgraduate scholarship programmes for Black and non-White people (e.g., Bangladeshis, Pakistanis) who are particularly disadvantaged in the education system.
• It’s a White person stepping aside for a promotion and transferring it (along with the financial benefits) to a Black person or a member of a particularly disadvantaged non-White group that suffers disproportionality in the labour market even after education levels and a host of other personal characteristics are accounted for.
• It’s a White person putting themselves in harm’s way and risk arrest to protect the life of a non-White person when they are being verbally or physically assaulted in a shop, supermarket or on public transport.

Indeed, sympathy and kind words are of little value beyond a certain point. They are a necessary basic step but they alone don’t dismantle systems of structural inequality, redress centuries of violence and socio-economic disadvantage or save Black and other non-White lives from being disproportionately affected by and dying from Covid-19. When we see consistency and integrity in action and privileged people permanently giving up something they value in return for nothing, and still caring about anti-racism and ‘racial’ inequality even after the news cycle has changed or when it becomes seemingly unpopular to do so, then perhaps the rise in the number of allies will be something to celebrate.

Samir is a quantitative social scientist. His ESRC-funded PhD in Advanced Quantitative Methods examines the ethnic and religious penalties experienced by Muslims in the British labour market. Alongside his doctoral studies at the University of Bristol, he has taught on the core module “Social Identities and Divisions” and on the Q-Step Programme. Samir is also a Cumberland Lodge Scholar (2020-2022). For Samir’s full profile, click here. 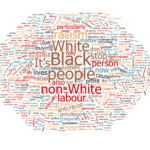