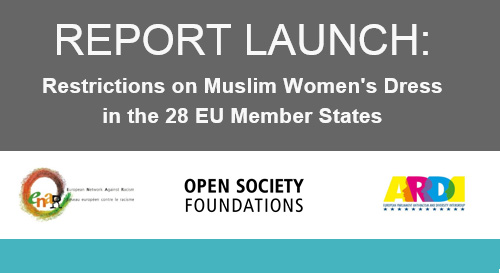 This event will take place in the European Parliament and is co-organised by the Open Society Foundations, ENAR and the Anti-Racism and Diversity Intergroup, and hosted by MEP Malin Björk.

One year after the EU Court of Justice ruled that the ban on headscarves at work can be legal, the struggle in EU countries to have high standards against discrimination and counter restrictions on Muslim women’s dress and Islamophobia continues.

The Open Society Foundations will launch a new report entitled “Restrictions on Muslim women’s dress in the 28 EU member states”, which fills a much-needed gap by paying equal attention to all 28 European Union countries laws, legal developments, administrative regulations, and institutional practices in employment, education, services and public space. It also discusses the political context and platforms that give rise to restrictions and the push back against them.

Send an email with your full name, date of birth, nationality, ID type and number to ellen.mulder@opensocietyfoundations.org by 19 April. Note that places are limited.