Our response to common justifications for Zwarte Piet/Black Pete

The Black Pete (or Zwarte Piet, as it is known in the Netherlands) tradition perpetuates old racist stereotypes and a colonial perception of “the other”. Here we collect and debunk the most commonly used arguments to defend Black Pete.

“Zwarte Piet is not Black, he’s just covered with soot from the chimney”

Why aren’t his clothes black as well then? And going down a chimney does not give you big painted red lips or afro hair. The chimney story also cannot explain why Zwarte Piet often speaks with a stupid accent.

Until 1960 Black Pete was usually considered the black servant of Sinterklaas, but the story was ‘modernised’ once immigrants from Suriname and the Dutch Carribean began to arrive in the Netherlands. You can however still hear the origins of Zwarte Piet in the traditional nursery rhymes that describe Zwarte Piet as ‘black as soot’ rather than ‘black with soot’.

According to historians, Zwarte Piet is clearly based on images of child slaves who were used by wealthy families at the end of the 17th century.

“Why all the fuss about the dressing up and blackfacing? It’s just a costume”

When you paint your face black so that only the whites of your eyes remain visible, wear an afro-wig and big golden earring, and paint your lips thick and red, this is a universally recognised racist stereotype of a Black person.

Seeing black facing as fun and harmless ‘dressing up’ does not give any consideration to the fact that people of African descent are often confronted with hostility and even violence, simply because of their skin colour. They also have limited access to employment, housing, education and health; are more likely to be stopped and searched by the police, but also to become a victim of crime; and are under-represented in politics and the media.

A White person can simply wash the black face paint off and go back to his/her ‘privileged’ position. For black people, however, who have to overcome the socio-economic and psychological effects of racism on a daily basis, blackfacing is an insult to their feelings and reality. It’s not ‘just a costume’.

“This is a century-long tradition. Why would we need to change it?”

Zwarte Piet is not really that old. While the story of Sinterklaas builds on a tradition that goes back to pre-Christian times, the Zwarte Piet figure was only introduced in the middle of the 19th century, during the Dutch colonial period. Zwarte Piet itself is therefore only 150 years old, which means that only six generations of children have grown up with it.

Thankfully, we can change offensive traditions. In the Flemish town of Ypres, for example, a former tradition was to throw a live kitten out of the tower, and it is now done with a plush kitten.

The Sinterklaas tradition exists in many northern European countries. However, it is only in the Netherlands and Belgium that the frightening companion of Saint Nicholas has become a ‘Black Pete’. In Austria and some Eastern European countries, for instance, St Nicholas’ companion is ‘Krampus’, a devil-like figure which has no racist connotations.

“People love Black Pete. If you get rid of him we’ll lose a positive image of Black people”

“I have Black friends who have no problem with it”

That may be. But remember that some people might feel uncomfortable taking a clear standpoint on such a sensitive topic triggering emotional reactions.

Many Black people have long seen Black Pete as offensive and hurtful. Already in 1987, the children’s programme Sesame Street talked about the fact that many black people did not like Zwarte Piet because they got called like that in the Sinterklaas period.

The number of people mobilised around this issue is growing, and the fact that it has recently drawn international attention will mean that more and more people feel empowered to make themselves heard.

Of course racism will not stop if Zwarte Piet disappears. Nevertheless, it is extremely important to respond to this phenomenon seriously. Racism is not just explicit, it is often structural, and negative representations of Black people are part of these structural forms of racism, deeply embedded in society.

“You’re too politically correct! This is just harmless fun!”

There is nothing harmless or pleasant about racism, whether it manifests itself as everyday discrimination or unconsciously ridiculing someone’s skin colour and historical trauma (colonisation and slavery). Racism does not just come out of nowhere, it is determined by many factors, and is primarily a result of an uneven power relationship. Images of Zwarte Piet serve to unconsciously reinforce this system of inequality.

“You exaggerate. We are not in the United States, we did not have slaves in the Netherlands or Belgium”

No, but like all the other European imperial nations, the Netherlands and Belgium engaged in slavery in their colonies and greatly benefited from it. The Netherlands is one of the top 10 countries that got richer thanks to slavery. Belgium is associated with one of the most brutal and violent colonialisations in history, in Congo.

Racism was an integral part of the colonial system, and served to dehumanise non-White people to justify the exploitation of their land and their work. While Belgium and the Netherlands are no longer colonial powers, there is still a long road ahead to address the social, political, economic and cultural consequences of colonialism that continue to this day.

The annual celebration of Black Pete is a painful reminder of a dark chapter of the history of the Netherlands and Belgium.

“Children are colour blind. Why do you now raise the issue of racism?”

Parents often think that this is not important, or are afraid to talk about race and colour, and therefore do not teach children to deal with racist undertones present in society. Building a positive racial and cultural identity is crucial for non-White children in a White majority population. White children must also learn to develop the skills to function in a multicultural society.

“How can we make the Sinterklaas tradition fun without Zwarte Piet?”

No one is asking to abolish the whole Sinterklaas tradition and festivities, only to remove the racist references so that the party can be fun for everyone.

Many people have been thinking about how a ‘modernised’ tradition might look:

“What can I do to support a racism-free Sinterklaas?”

Share our visual and call for action for a racism-free Sinterklaas on social media:

As well as the visual, you can add the link to this page to your tweets and Facebook posts.

– Join the International action against Dutch racism #StopZwartePiet, including:

– Write to the media if articles trivialise the debate, or to give support to opinion pieces questioning Zwarte Piet.

– Speak to your friends about Zwarte Piet. Let people know that it is an outdated and offensive tradition, and that we need to make it into a fun celebration for everyone.

This page is based on the FAQ on the Pietenplan Vlaanderen website. 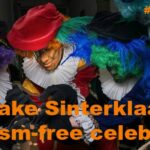