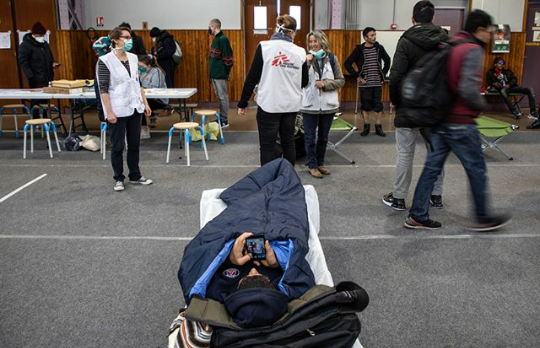 In France, vulnerable foreigners are excluded from Covid-19 measures

Following the spread of the Covid19 virus in France, the President of the French Republic Emmanuel Macron communicated on 16 March 2020 the containment measures recommended by the crisis cell and adopted by the National Assembly on the same day. This speech, using defence and nationalist rhetoric, combines a feeling of anxiety with a feeling of belonging to a single national community that must be protected. It prioritises protection measures according to membership of this national community and de facto excludes vulnerable categories of foreigners from national containment measures.

Preferring the expression “we are at war” to the terms “confinement”, “resistance”, “struggle”, or even “individual and collective resilience” is not trivial or without consequences.

This discourse is built on a strategic rationale which presents war as a solution to disease. If this speech provoked strong reactions, in particular by certain public figures, others saw it simply as a way to solemnise the problem of the propagation and the individual responsibility of each citizen to avoid it. However, the problem with techno-strategic language is that it is of no use in a public debate on health. Indeed, healthcare staff and the research community have repeatedly denounced the lack of resources made available to them following the various political reforms since 2017, as part of the current presidential mandate. The phraseology borrowed from techno-strategic language by Emmanuel Macron has the discursive effect of obscuring the inability of health authorities to react to the phenomenon following the public health policy led by his government.

Macron’s speech also builds on the ideology of military power and a normative discourse around “national security” aiming to persuade of the need to “protect against a presumed enemy”. This fuels a culture of war and legitimises the use of force and military means in the face of events described by public authorities as a scourge. Indeed, this same rationale forms the basis of the French government’s migration policy at the borders of the European Union. A few weeks earlier, it had communicated its “support” to the Greek government in the face of the “influx” of migrants at its borders.

Repeated no less than six times, the expression “we are at war” reinforces a feeling of fear as well as of belonging to a national community that must be protected.

His speech has other worrying discursive effects. While it seems evident that citizens must be protected from illness and health risks, the duty to protect non-nationals does not seem to be a priority for the President of the Republic and his government. By opposing “the children of the nation” to those who do not belong to it, the government excludes foreigners living in France, many of whom are in a vulnerable situation, from national containment measures.

The question of protecting non-nationals in vulnerable situations, who are all the more exposed to the virus, did not arise. This should not come as a surprise, since the government’s migration policy is in keeping with this discourse, and consists of a real war on migration.

In addition, the “distant idea (…) which has become an immediate, pressing reality” for “our country” in the introduction of the speech implies the virus is something that has been imported by foreigners into the nation.

Although it is up to the scientific committees responsible for studying the phenomenon to verify this hypothesis, the reference to an “invisible enemy” from abroad is already showing up. Presenting this phenomenon as foreign puts the fault and the responsibility for its propagation on the figure of the ‘foreigner’, as an agent.

The number of cases of violent racist discourse and behaviour – targeting people of real or supposed Chinese origin – in France and elsewhere from the start of the media coverage of the virus testify to these latent effects.

Furthermore, the spread of Covid19 has been focused on the movement of people, and addressed by political representatives as a migration issue. Indeed, one of the measures presented as a solution to this problem was the closure of borders inside and outside the Schengen area. In his speech, Macron presents the decision to close the borders for thirty days as a European one, made “among Europeans”.

While the use of the expression “we are at war” was intended to alert “on the gravity of the situation”, it clearly also falls under the logic of “the French first”. Thus, while health instructions are clear and recommend “protecting the vulnerable”, the President of the French Republic excludes foreigners from national confinement measures.

Indeed, while “each of us must at all costs limit the number of people with whom we are in contact each day”, very few protective measures are foreseen for asylum seekers detained in administrative detention centres. Given the health situation and a first contamination identified at Lesquin detention centre, each individual should be able to benefit from protective measures regardless of their legal status or their nationality.

Migrants who are homeless also represent a particularly vulnerable category of individuals but are, once again, denied any protection measures by the government. According to associations defending the rights of foreigners, more than 3,500 people are currently on the streets in the Île-de-France region, without access to accommodation or medical and social support. 500 people in the commune of Aubervilliers have taken refuge in a tent camp without access to water or waste management. Dozens of other camps exist in Île-de-France without any public aid for families with children.

– The requisition of cultural centres, empty school buildings and any other places allowing accommodation and the implementation of prevention measures.

– Food distributions organised by public authorities to compensate for the fact that associations can no longer continue their action in this area.

– The installation or reopening of water points and the provision of soaps so that homeless people can apply the public health authorities’ recommendations.

– Access for all asylum seekers to the reception conditions provided by the French Immigration Office (OFII) in order to ensure minimum financial resources for everyone to be able to cope with the required containment measures.

– The ban on evictions targeting people living in emergency structures.

Gabrielle Peyres is a French sociologist and anthropologist specialised in the study of migration, currently volunteering for ENAR.

By Georgina
By countryMigrationPublic Discourse