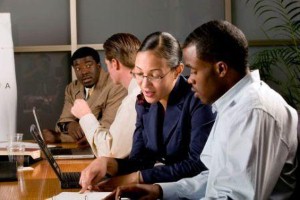 The meeting provided a platform to reflect on the policies that support and/or hinder the hiring of third-country nationals residing in Europe, and brainstorm on innovative solutions for hiring migrants.

The ENAR Equal@work Initiative is a pioneering initiative, launched in 2009, which brings together companies, trade unions, public employers and ENAR members to promote equality in employment for migrants, ethnic and religious minorities. The added value of ENAR’s Equal@work initiative is the creation of a multi-stakeholder dialogue, with the support of five major companies (Adecco Group, Ernst&Young, Groupe La Poste, L’Oréal and Sodexo).

Ethnic minorities and migrants experience many obstacles in accessing the labour market, which have been highlighted by the European Network Against Racism (ENAR), through its Equal@work initiative.

ENAR and the Association to Encourage Professional Integration (AFIP) also focus on structural discrimination in employment that prevents ethnic minorities from climbing the career ladder or reaching their full potential.

Goal of the Conference:

The goal of the 5th Equal@work European conference is two-fold: raising-awareness on the glass ceiling affecting ethnic minorities in Europe and building the capacity of a multi-stakeholder network on diversity in the workplace. In building on Equal@work expertise, the conference will explore innovative ways to combat disparities at the top and at the bottom of the career ladder. Participants will have an opportunity to discuss to which extent limited professional advancement is a consequence of poor access to good jobs by minorities across the labour market.